What is a Black Hole? How are Black Holes formed? Learn all About Them

Learn all about black holes, what is a black hole? How do black holes form? Find the answer to these questions and many more right here! 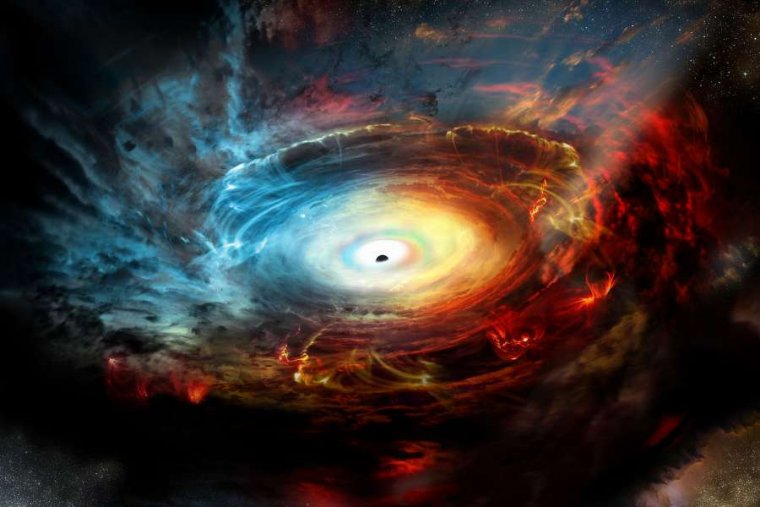 The discovery of black holes in our universe has generated an intense curiosity in humans and has caused us to produce some of the most interesting hypotheses surrounding them such as believing they are wormholes into other dimensions, or that they are the secret to bending space and time. Learn all about these astrological phenomena produced by one massive star, or more, collapsing.

What is a black hole?

Technically, a black hole is the remains of a dead star which has such an intense gravitational force that nothing can escape it, not even light, that's why we perceive them as black. While many stars end up disintegrating into what's known as a white dwarf, some very massive stars explode in what's called a supernova. When this happens, a small yet extremely dense part of the star is left behind, the remnant star's powerful gravitational force will overwhelm everything else and the material it's made of will be crushed to an infinitely small point with an infinite density.

This explains why we call them black holes. Once they form, they attract all surrounding cosmic matter, such as planets or other stars, and when a celestial body passes near its gravitational field, it risks entering the point of no return. This is the place where the gravitational field is so strong that the astronomical object would need to be traveling faster than the speed of light in order to escape.

In 1783, the geologist John Michell first mentioned the possibility of a black hole and was a fan of Newton's theory of gravity and the theory of escape velocity. According to which there is a relationship between the strength of the gravitational pull between two objects with mass, and the speed they must be traveling in order to overcome each other's gravitational pull and escape.

Based on these premises, John Michell calculated that a celestial body 500 times bigger than the Sun and with the same density would have an escape velocity equal to that of the speed of light and would be invisible. In 1915, Einstein demonstrated that light is influenced by gravity, around the same time that Karl Schwarzschild insinuated that an object with enough mass could absorb even light.

After some interesting debates over how black holes are formed, such as that of Robert Oppenheimer in 1939, the final word on the theory of black holes was produced in 1967 by Stephen Hawking and Roger Penrose. Shortly after, John Wheeler coined the term "black hole" in a cosmological reunion in New York.

Initially, it was believed that only one type of black hole existed in the universe. However, technological advancements and direct observation of these cosmic phenomena have allowed us to establish four categories of black holes based on their origin and properties.

If we take into consideration that we have found black holes which are 20 thousand million (20 000 000 000) times the mass of the Sun, it comes as no surprise that these phenomena have their own category. These black holes are usually found in the center of galaxies, and form through the same process earlier mentioned. They get so big because the cosmic matter they suck in adds to their mass, hence it being at the center of a galaxy.

This kind of black hole has a mass between 100, and a million solar masses (the mass of the Sun used as a unit of mass). These are the remains of a massive star, as when massive stars reach the end of their lives, the hydrogen that they've been fusing into helium is nearly depleted. So these monster stars begin burning helium, fusing the remaining atoms into even heavier elements, up until iron, whose fusion no longer provides enough energy to prop up the star's outer layers. These top layers collapse inward and then explode out as what we call a supernova.

These have a bigger mass than micro black holes but less than an intermediate-mass one, usually between 5, to several tens of solar masses. They come from an exploding star that's not quite a supergiant, hence it's reduced size, approximately some kilometers in diameter, although with more mass than the Sun.

These are super small, around the same size as a grain of sand, and according to physicists, they were created alongside the universe. Their existence hasn't yet been confirmed and despite them being so tiny, some can even have the same mass as the Sun, although how they form isn't yet known as they don't follow the usual gravitational collapse procedure. 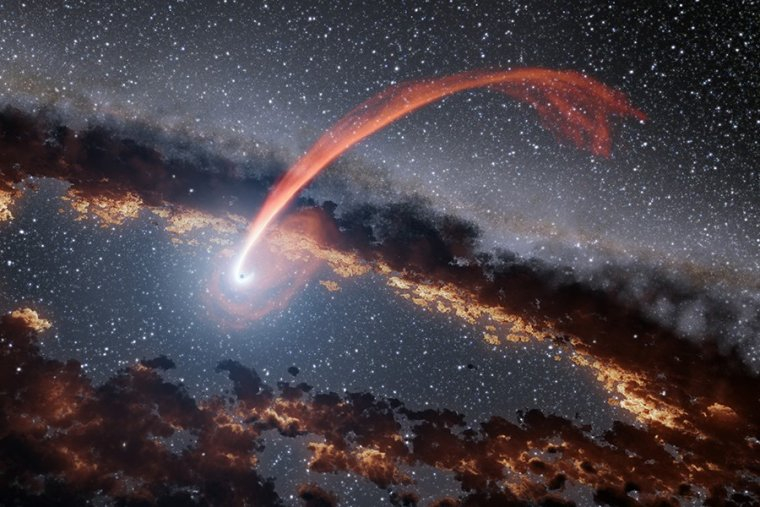 The hypothesis of time and space travel through black holes

We first heard of this fascinating idea from Stephen Hawking, and it began to get more and more attention, it was the idea that we could use black holes to travel through space and time.

According to his hypothesis, these structures could be the 'wormholes' we've been looking for, which would allow us to take a 'shortcut' through time and space.

However, our hopes of dominating space and time travel might be just that, wild hopes, as once we begin to analyze our circumstances and the speed at which technology progresses, we can estimate that humans won't leave our solar system for at least another millennium.

But perhaps we will be able to travel through a 'wormhole'. This hot topic is the product of a hypothesis about black holes in which they are seen as an escape route over enormous distances in the universe. And it might be possible, as they corroborate Einstein's equations and could be the tunnels that connect different points in space and time.

These lucubrations have always been simply a hypothesis, although, near the end of 2018, the scientific community discovered something exciting. They discovered a black hole which moves so fast that it distorts the time and space revolving around it.

With all we've just learned about black holes, we can see how they are such an exciting topic which to this day gets lots of attention from scientists all over the world, yet still has so many unanswered questions. Below there are 5 interesting facts about black holes. 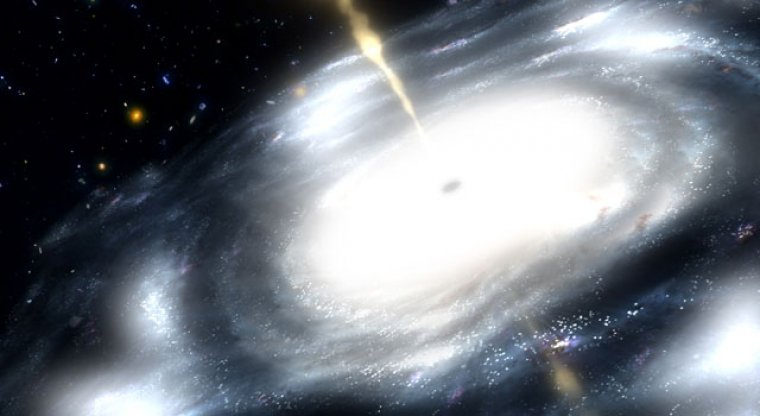 1. How would you die if you fell into a black hole?

In the 90s, the astrophysicist Martin Rees came out with the interesting theory of spaghettification (yes, from spaghetti) to try to answer the question of how we would die if we fell into a black hole. According to Rees, our bodies would be stretched vertically and compressed horizontally until we would resemble a spaghetti.

As the years have passed, this idea has been somewhat left behind and a new theory has come to light, death by being flattened. Due to backscatter, all the weight of all the cosmic matter absorbed by the black hole would fall on our back, squishing us, and we would simply cease to exist and disintegrate before becoming a spaghetti.

2. The biggest black hole in the universe

It was discovered in 2018 and is 20 thousand million (20 000 000 000) times the mass of our Sun. It is the biggest black hole ever found in our universe, and it's growing rapidly due to the gases surrounding it which when absorbed on a daily basis, generate heat and friction. According to The Australian National University, it's able to absorb our sun every two days.

If this monstrous black hole were in our galaxy, it would shine ten times brighter than the moon and eliminate all the other stars in the sky. Its size is now the center of attention for many astrophysicists as it defies the theory of the formation of the universe. If the Big Bang happened 900 million years ago, this black hole shouldn't have had enough time to grow to its current size. It's a genuine mystery...

3. How is a black hole formed?

The following video is of a NASAastronomer answering questions and explaining how black holes form. It is extremely interesting and detailed, so I would suggest you begin watching right now!

4. Are there more black holes in our galaxy?

A state of the art program designed to recreate cosmological situations, and called Romulus, is being used by the Universities of Yale, Washington, Paris, and London and has revealed something very interesting: galaxies can hide many supermassive black holes like the one in the center of the Milky Way.

In other words, the supermassive black hole at the center of our galaxy surely has siblings which simply haven't been discovered yet, and are probably not as big.

What would happen then? According to the hypothesis, it would create an incredibly violent collision from which one much bigger black hole would appear. In fact, we have never witnessed two black holes colliding, but according to a recent analysis of the Galaxy NGC 6240, this is about to happen between two supermassive black holes which are getting dangerously close to each other.

Other theories dispute this and claim that they wouldn't fuse together, but instead one would repel the other, which would zoom away at a ridiculously high speed. But like most lucubrations about black holes, it remains a mystery.