Four Leaf Clover: Why Does It Symbolize Good Luck

Discover the magic of the four leaf clover 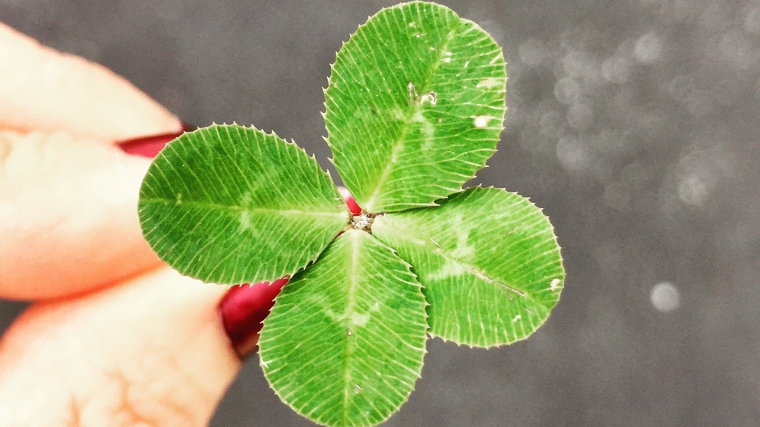 The four-leaf clover is one of the most common good luck symbols - the leaves represent hope, faith, love, and luck. |

Many people have deep-rooted superstitions that they try to take into account in their daily lives.  For example, walking under a ladder is considered bad luck, but finding a 4 leaf clover is one of the luckiest things that can happen to a person.

According to the story behind the superstition, the four leaves that appear on clovers are an abnormality of the plant. We may be able to find a four-leaf clover, but can we grow it in our own house? Discover all this and much more in the following article.

What is a four leaf clover?

The four-leaf clover is a variation of the basic clover or shamrock, that is found very rarely, and usually represents a mutation of the white clover.

Botanists attribute their appearance to various factors, ranging from the composition of the earth, the environment, humidity, or pollution. Statistically speaking, only 1 in 10,000 classic clovers has the coveted 4 leaves.

What does a four leaf clover mean?

The legend that attributes magic powers to the four-leaf clover is not recent. Authors place it in ancient Rome, and some religious records state that it was, in fact, Eve that brought the lucky charm when she was banished from the Garden of Eden.

Due to its rarity, the Celtic druids of ancient England considered the four-leaf clover a sacred plant that helped sense the presence of demons, and in China, it was a symbol of power.

In the Middle Ages, the four-leaf clover began to be considered a lucky plant, an amulet synonymous with good fortune that gave its bearer prosperity and eternal luck. In simple terms, the four-leaved clover represented a source of peace, fame, and serenity.

From the nineteenth century onward, it becomes trendy and begins to appear on jewelry items, especially in the French capital. You could easily see a four-leaf clover on necklaces, bracelets, cuffs, buttons, ties; you name it!

Popular superstition links the four-leaf clover with the concept of good luck, although, in Belgium, it is said that it helps to win trials, while in Lorraine, France, it protects from the devil and ghosts.

In ancient times it had medicinal uses; the Roman Plinio used it against snake bites, although if this were to happen to you today, we recommend that you go straight to the emergency room and seek medical care.

Furthermore, the druids used clovers in potions and medicines, but magicians also used it in love potions. A word of warning: some people claimed four-leaved clovers were harmful. Sophocles, one of three ancient Greek tragedians, documented the plant in Ancient Athens and believed it was poisonous.

Nowadays, if you have a four-leaf clover and you want to use it for luck, you can put it under your bed as it will help cleanse bad energies. You can also dry the leaves which people believe will give you good luck for a year, and if you put it in the pocket of a loved one, they will no longer be able to resist your charms.

The connection between the four leaf clover and love is not casual; in ancient times it was believed that the shape of the plants revealed their benefits; thus, it was thought that the heart shape of the leaves of the four-leaf clover helped lovers feel more passionately about each other.

Each civilization or culture gives a special meaning to this plant mutation. In the West, it is said that the leaves would bring fame, wealth, and a double ration of health.

Christians identified the clover with the four virtues: hope, faith, love, and luck. It is also suggested that it gives good luck because it has the appearance of a cross, symbol of the Christian religion par excellence. The Anglo-Saxons believed that the four leaves represent fame, wealth, love, and health.

Can I grow clovers?

Nowadays, it is easy to find kits to cultivate a four leaf clover in your own home. To do this follow the instructions below:

An interesting and little known fact is that what is marketed as being a lucky clover is a variety known as red clover. This plant consists of four green and red leaflets, and it is a widespread plant, although it may not carry the same symbolism as its most famous four-leaved cousin.

The chances of finding a four-leaf clover are minimal, which is why the legend says that whoever finds it without looking for it will truly enjoy its power.