Amber: Its Significance, Healing Properties, and Uses in Gem Therapy

Discover the benefits of tiger's eye and how to use this magic crystal.

1
Amber: meaning in gemology
2
Amber's healing properties and uses in gem therapy
3
How do you clean amber?
4
Amber and chakras
5
Which zodiac signs could benefit from amber?
6
Some fun facts about amber
7
Discover the rest of the Gemstones! 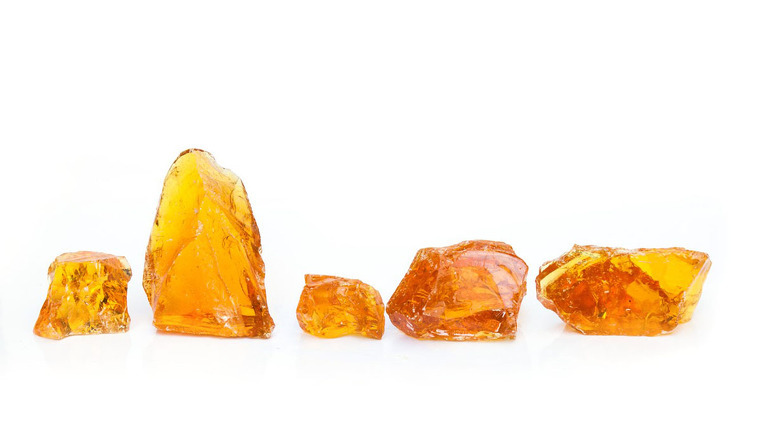 Amber: Its Significance, Healing Properties, and Uses in Gem Therapy |

Many magic stones have such a special hue that their name becomes a colour. Emerald green, jet black, or amber, for example. This last one is one of the most powerful gems out there. Below, we will explain its meaning in gem therapy, its uses so that we can benefit from its powers, and what zodiac signs can benefit the most from this stone.

Making up approximately two-thirds of the world's reserves, Baltic amber is used in 90% of jewellery made from this stone. This type of amber is found in Germany, Denmark, Sweden, Finland, Estonia, Latvia, Lithuania, Poland, Russia, and Ukraine, in enclaves that formed over 50 million years ago.

It's worth noting that this gem stands out among the rest since it is made of fossilized pine resin, formed over the course of forty million years. Although yellow amber is the most common, this gem can also be found in pale yellow, orange, cognac, green, black, blue, and red. These different hues are highly sought-after by gem therapy specialists all over the world.

Amber has been known for millennia, much before our time, and many civilizations have benefitted from this gem's power. The first amber necklaces date back to 12000 before Christ, and archaeologists found remnants of these jewels from the Neolithic period, both in homes and decorations.

In Ancient Rome, women wore these stones on their hands as they were said to bring eternal youth. In the Middle Ages, amber was burned to fight the plague, and in certain African tribes, it was used to make magic talismans for protection.

According to gem therapy, amber's powers and properties are very interesting on both a physical and psychological level.

If we focus on this first aspect, amber is known for its power to relieve tooth pain, since it has anti-inflammatory properties. It helps to improve respiratory congestion and to fight related respiratory conditions. For example, ear or throat problems, colds, the flu, and many others.

On a psychological level, these magic stones help to reassure us, to find our place in the world, and to express our personality without hesitation. Amber is also beneficial on an intellectual level. This gem promotes clear and stable reflection, and its ability to promote optimism is a great ally when it comes to fighting depression.

How do you clean amber?

After benefitting from amber's power for a period of time, it's a good idea to purify its energy. This can be done by submerging it for several hours in lightly salty demineralized water, and preferably on a night with a new moon.

Afterwards, to be even more efficient, the amber can be placed in the sun for up to twelve hours.  You can also place it on a large geode crystal and get a similar effect.

In Reiki, amber is a highly versatile magic stone, and its healing energy can help with many chakras and energetic points in the human body.

So, this gem can be placed on the second, third, fourth, or fifth chakra. If placed on the second one, the sacral chakra, this prevents digestive issues. The third chakra (solar plexus) gives us willpower. The fourth, heart chakra, gets rid of tachycardia and heart palpitations, and finally, the fifth chakra (throat chakra), serves to fight sinus infections, colds, otitis, and other afflictions.

Which zodiac signs could benefit from amber?

Amber is lovely to look at, it touches the soul, warms the heart, and lights up the imagination. In the zodiac, Gemini, Aries, Leo, and Virgo can all benefit from this gem.

So, if your partner was born under one of these signs, don't think twice about giving them an amber jewel, so that they can benefit from all of its enchantment and power. Don't forget that this stone is vegan as well, it isn't of animal origin like the pearl, for example.

Some fun facts about amber

Currently amber is a magic gem that's quite rare, almost like a precious stone. In fact, normally it's used in jewellery and is often embedded in silver, platinum, or white gold settings. It's easy to find amber necklaces, earrings, and other pieces.

On this note, we want to mention that amber is one of the three stones that are plant-based (along with the diamond and onyx). Like diamonds, amber is the result of thousands of years of compression in nature, as we've explained, and in this case, it is made of tree resin.

Amber often has natural imperfections and shiny cracks as well as prehistoric inclusions: seeds, leaves, feathers, or entire insects. A piece of amber that contains insects that date back millions of years isn't just a collector's item, actually, this is an invaluable way for palaeontologists and geneticists to dive into the past.

These insects are sometimes very well conserved but not enough to make clones of extinct species, something that we often think of since movies like "Jurassic Park" put these ideas in our heads. This is pure science fictions - DNA left in these stones is too decomposed to recover anything from it.

As with many other stones, Greek mythology tells the story of amber's divine origins. Phaethon, son of Helios, the sun god, asked his father for permission to drive the sun chariot to cross the sky to prove his divine descendence.

With his father's permission, Phaethon took the sun chariot. First, he flew too high and caused extreme cold on earth, and then, he flew too low and burned part of the earth which is now the African Sahara.

Zeus was then forced to intervene, and with a ray of lightning, he destroyed Phaethon. Then, Phaethon's sisters turned into poplars forced to eternally weep golden amber tears on the land.