Aquamarine: Its Significance, Healing Properties, and Uses in Gem Therapy

Discover the benefits of aquamarine and how to use this magic stone.

1
Aquamarine: meaning in gemology
2
Aquamarine's healing properties and uses in gem therapy
3
How do you clean aquamarine?
4
Aquamarine and Chakras
5
Which zodiac signs could benefit from aquamarine?
6
Some fun facts about aquamarine
7
Discover the rest of the Gemstones! 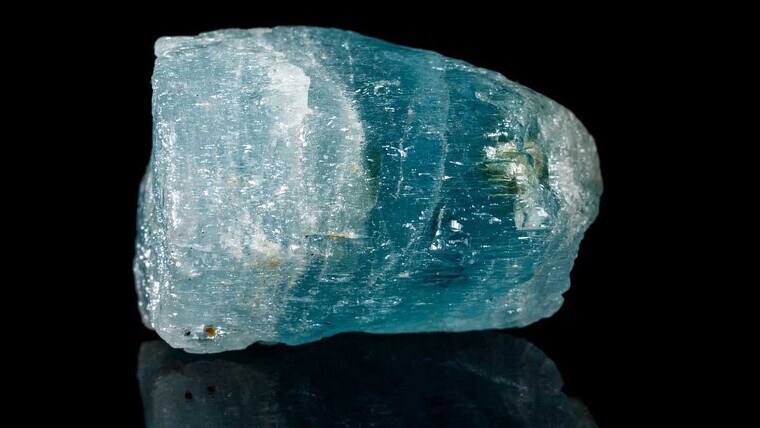 Aquamarine: Its Significance, Healing Properties, and Uses in Gem Therapy |

Aquamarine is a magic gem that varies in tone from light blue to blue-green. It is composed of silica, aluminium, copper, beryllium, and iron, and is classified as a cyclosilicate. The beautiful colour of this precious stone is attributed to the presence of iron in the beryllium's structural channels.

This stone has been known for millennia, and since this time, it has been used in necklaces, earrings, and other jewellery. Below, we explain its properties, health benefits, and what zodiac signs it's best for.

Thanks to gemology we know that aquamarine is a stone that mainly comes from countries like Brazil, Madagascar, and Russia. On the Asian continent, aquamarine is found in Vietnam, India, Nepal, Afganistan, Pakistan, and China, and in Africa, Nigeria, Mozambique, Namibia, and Zimbabwe.

This stone's name comes from Latin, 'aqua marinus' which means seawater. Sometimes it's also called beryllite or Siberian Chrysolite. In ancient times, aquamarine was thought to be a gift from the gods of the ocean, Poseidon, Triton, and other deities, and that's where its name came from. Other legends point to seahorses bringing aquamarine to the shores taken from the nymphs treasure chests.

Because of its colour, it has been known as the sailor's gem throughout history. These seafaring people used it as a talisman to fight the current, storms, and on big journeys to stay out of harm's way. It was also known to bring luck and riches.

Aquamarine also signifies a happy and mutually faithful marriage, particularly for young couples. Giving your partner an aquamarine engagement ring is a promise for a happy marriage.

Aquamarine brings strength to its owner and preserves vision. This stone also enhances the immune function (particularly in the case of the nervous system, bladder, kidneys, and liver). Besides, it helps with tooth and jaw problems and facilitates the elimination of toxins from the body, as is the case with fluid retention, for example. On a psychological level, it helps to overcome depression because it reduces tension and stress.

In gem therapy, all over the world, aquamarine has been said to have specific magical properties. In India, it was considered a good luck charm, and in ancient Egypt, it was carved into talismans. In Rome, it was known for the power to bring reconciliation between enemies, and in Greece, these magic stones were told to be the treasures of mermaids. On the other hand, in China, aquamarine is the goddess that protects women and children. In Christianity, aquamarine was associated with Saint Thomas, since this apostle travelled the seas to spread his religion to new lands.

As far as its magical powers, it's worth noting that in the Middle Ages, alchemists used aquamarine to prevent fluid retention and ease digestion. Apart from this, it was also thought to be the antidote for any kind of venom.

How do you clean aquamarine?

After a while, the aquamarine will run out of energy after sharing all of it with us. When this happens, it needs to be purified energetically by submerging it for a few hours in slightly salty demineralized water. For the best results, you can recharge it using the sun's power or natural light, or instead, you can place the aquamarine on top of a large geode.

If someone gives you one of these magic stones, it would be a good idea to reset it using the previously stated steps, which will get rid of any vibes that it had retained prior. This gem can also be purified by burning incense next to it.

Aquamarine, like so many other magic stones, is closely related with the chakras, or the energetic points that we have throughout our bodies. To be more specific, aquamarine is related to the third chakra (the solar plex), the fifth (the throat), and the sixth (the third eye).

This is the perfect stone to keep by you while meditating since it protects your aura and cleanses your essence. If you place it on the throat Chakra, it will combat allergies and other irritations related to this organ.

If placed on the third eye Chakra, it improves clairvoyance, divination, and intuition. Also, it works to improve vision in a more literal way as well for those with conditions involving the eye, keeping these from getting worse.

Which zodiac signs could benefit from aquamarine?

As we explained before, each zodiac sign has several gems associated with it that give its natives a special power. In aquamarine's case, it particularly favours water signs like Libra, Aquarius, and Pisces.

Some fun facts about aquamarine

The first aquamarine gems were discovered in Brazil between 1551 and 1554 during the earliest explorations of the Portuguese colonies. It wasn't until 1881 when the first large aquamarine stone was found. This was a green crystal that weighed in at 7 kilos. The largest jewel quality aquamarine was discovered in Brazil in 1910 and weighed a trifling 110.5 kilos. Later, in 1964, a 22-kilo aquamarine jewel was unearthed in an agricultural area of this country.

Large crystals that are discovered often end up in museums where the public can see them and learn more about gemology.

In choosing a great aquamarine gem, you have to be careful to avoid getting ripped off: blue coloured glass, duplicates, and synthetic spinal, particularly blue ones are used as imitations. Synthetic aquamarine has been made in Russia, but it hasn't been widely sold. Generally speaking, aquamarine's price depends on the deepness of the blue, purity, and of course, how rare the gem is.

To make this stone stand out with subtle beauty, there's nothing better than soft coloured metal. So, aquamarine goes particularly well with white metals like silver, white gold, platinum, or rose gold.

Lastly, aquamarine can be used to bring harmony to a place, to promote a positive communication flow in a home, business, or company. However, you need to keep in mind that a large aquamarine gem will be quite expensive.