Emerald: Its Significance, Healing Properties, and Uses in Gem Therapy

Discover the benefits of emerald and how to use this magic crystal.

1
Emerald: meaning in gemology
2
Emerald's healing properties and uses in gem therapy
3
How do you clean emerald?
4
Emerald and Chakras
5
Which zodiac signs could benefit from emerald?
6
Some fun facts about emerald
7
Discover the rest of the Gemstones! 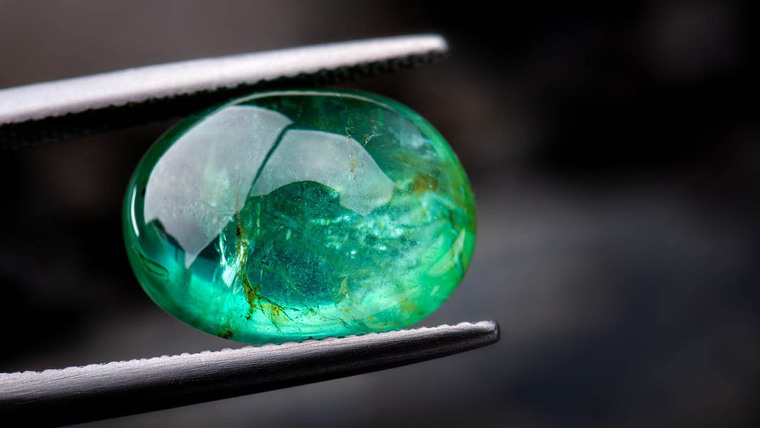 Emerald: Its Significance, Healing Properties, and Uses in Gem Therapy |

Emerald is one of the most sought out gems for its beauty, rareness, and beautiful green colour which gives it an exceptional value as the magic stone associated with hope, wisdom, and knowledge of the truth.

Magic Horoscope brings you a complete study on the origins of this precious stone and the powers attributed to it by gem therapy, what signs of the zodiac it could benefit in particular, and other fun facts about emerald.

The etymology of the word emerald is uncertain, but signs point to its origins being either Persian or Sanscrit, meaning 'heart of stone.' This is a green beryl variety which is a mineral composed of cyclosilicate and aluminium.

This is a precious stone that has always fascinated humanity (although sometimes there's doubt about whether these references could also be talking about other gems with similar appearances). 5000 years ago, Egyptians used their emerald mines to make jewelry for the aristocrats. Cleopatra was particularly captivated by them. In this culture, beetles, symbols of eternal life and immortality were often carved into green stones like amazonite and emerald.

The Roman Empire also valued these gems, and Nero came up with an invention to improve his vision by putting an emerald in front of his eyes, which he thought would improve his vision. In Christianity, when God chased Lucifer out of paradise, one of these precious stones fell from his crown as a symbol of his downfall. Later, it was carved into the famous Holy Grail that Jesus Christ used at the last supper.

In the Inca Empire, the emperor wore an emerald as a sign of power and semi-divine sovereignty.

Shifting our focus to emerald deposits, the highest quality ones are located in Colombia, at the Muzo mines, to be more specific. Certain mines in Brazil and the Ural Mountains in Russia also stand out. Other locations where this mineral can be found include the United States, South Africa, Ghana, Madagascar, Malawi, Mozambique, Namibia, Nigeria, Tanzania, Zambia, Zimbabwe, Afganistan, India, Pakistan, and Australia.

The emerald is a magical stone that brings balance and love. It is known to bring happiness to the home, to promote friendship, and maintain balance with partners. If your partner has one of them of this colour, there are those that believe that this is a sign of infidelity.

According to the tradition, this is a stone that allows you to break duality allowing you to make decisions with ease when you're able to better understand the energies surrounding you better. So this will enable you to let go of judgments and intentions and to put energy from the heart into all of your actions.

The emerald is considered a potent stimulator of physical and intellectual development and is also known to improve vision, memory, the ability to generate tissue and improve organ function. Besides this, it's known to be a remedy to combat snake bites. This stone brings inner peace and harmony on a physical, intellectual, and emotional level.

Related: What is Gem Therapy? Gem Uses, Benefits and More

How do you clean emerald?

Magical stones need to be cleaned and purified often so that all of the negative energy inside of them is wiped away. Emerald, in particular, is known to wear out constantly, for which reason and if it is not cleaned for an extended period, it can hold onto negative emotions.

In this case, you should submerge it in water, but it should not be salty - if possible, use spring water (bottled water). After, you can recharge it in the Sun, or on a piece of rose quartz, or amethyst.

An interesting fact is that, unlike other gems, emerald doesn't need to be purified as frequently because it repels negative wave-lengths.

Emeralds open the Heart Chakra and have a calming effect on the emotions. This is a strange and whimsical stone that creates an excellent space for meditation. This opens us to the power of light, harmonizing the Heart Chakra so that its qualities can build strength.

This is a magical gem that promotes friendship and love, loyalty, the exchange of values, courage, spontaneity, and other powers.

If placed on the Third Eye Chakra, this mineral improves vision and clairvoyance, which makes it recommendable for those studying astrology or telepathy.

Related: The 7 Chakras: their Meaning, their Colours and their Stones

Which zodiac signs could benefit from emerald?

Emerald is a stone that is linked to magical energy that allows us to connect all of our inner strength and shows us that we aren't just black or white. Magical emeralds invite their owners to explore their dimensions and multiple facets.

In the Western Horoscope, this stone is traditionally associated with Cancer, Pisces, and Taurus, and is also equally as beneficial for Aries natives.

In Chinese astrology, on the other hand, this is the Rat's gem.

Some fun facts about emerald

As mentioned previously, this stone is associated with royalty, and many monarchs wore this gem in their crowns and jewellery.

In the Manta Valley, located in Peru, we find the Queen of the Emeralds - a legendary piece the size of an ostrich egg worshipped by tribes of the region. When the conquistadors arrived, they were able to hide it, and thus this region's treasure was never discovered.

Emeralds are used to make jewellery of all types, and some of these precious stones are particularly rare and can date back millions and millions of years. Necklaces, earrings, bracelets, rings, tiaras, headbands, brooches, and other accessories can all be found inlaid with emeralds.