Turquoise: Its Significance, Healing Properties, and Uses in Gem Therapy

Discover the benefits of turquoise and how to use this magic stone.

1
Turquoise: meaning in gemology
2
Turquoise's healing properties and uses in gem therapy
3
How do you clean turquoise?
4
Turquoise and Chakras
5
Which zodiac signs could benefit from turquoise?
6
Some fun facts about turquoise
7
Discover the rest of the Gemstones! 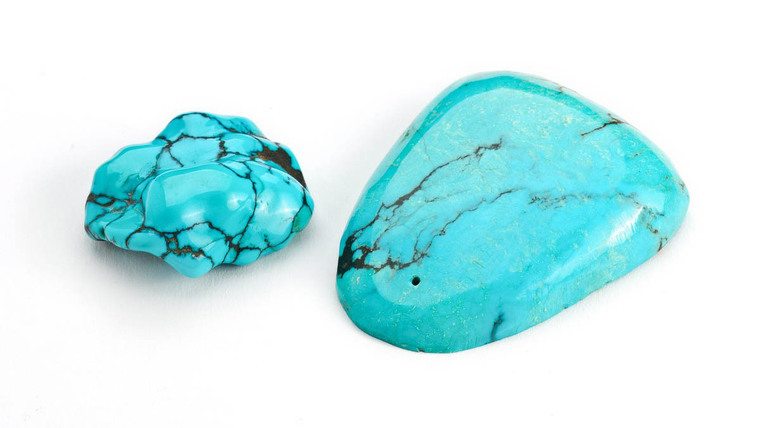 Turquoise: Its Significance, Healing Properties, and Uses in Gem Therapy |

Turquoise is a stone whose colour encompasses the hue of the southern sky and the sea at the horizon. This mineral's hue is so unique that there is a specific colour named after it. Few people know this, but, turquoise is a living mineral that evolves over time: its tone and colour can change, it can become more beautiful, or lose its shine.

Read more to enjoy this article where we'll dive into turquoise, its healing properties, what zodiac signs it helps out the most, and a lot more information, including fun facts.

According to gemology, turquoise is an aluminium and copper phosphate that ranges from light blue to apple green, and it has a triclinic crystal system. Its luminescence is green-yellow or light blue. The more copper it contains, the bluer it will be.

Turquoise is native to desert climates, and some areas where it can be found include the Red Sea, Mexico, United States, Afganistan, China, Israel, and Brazil. However, some sources say that the most beautifully coloured turquoise actually comes from Iran, in mines located near Nishapur. With this in mind, it's worth noting that the name turquoise means "Turkish stone" since the first exportation to Europe came from Turkey.

Since this stone has been mined for such a long time, as we mentioned, almost all of the original deposits have been depleted, with Iran being the exception since there is still an abundance of this rock there.

This is because turquoise was discovered thousands of years before our time, and while other magic gems were used to make tools, this rock was always used in jewellery, jars, and a wide variety of decorative objects. Besides, it was also ground into a powder and used as eye makeup.

Marco Polo mentioned that these stones came from the Sichuan province and were also found in Tibet, where they were used as a raw material that divine figures were carved into.

In 15th Century Europe, turquoise was a symbol of masculinity, and during Romanticism, this colour represented lovers. Moving back in time, in the East, it was known to bring good luck and as an antidote for snake and scorpion venom. In Egypt, it was left in tombs as an offering.

As with many magic stones, turquoise is influential both on the physical and spiritual plane. This is what gemology claims, the alternative medicine that researches the power of crystals and how they contribute to well-being.

In this sense, we want to point out that most of all, turquoise is a purifying and detoxifying stone. Also, it helps to regulate the nervous system and cleanse body fluids. When applied to a wound, it fights viruses and infections and works as an antidote in cases of poisoning. In spite of this, you should remember that a gem therapy treatment should never be used as a replacement for your doctor's indications.

Besides, it protects the respiratory system and helps to regulate the nervous system with its calming effects.

On a psychological level, magical turquoise stones can give your soul strength and courage when facing all kinds of risks. On the other hand, they can absorb negative thoughts.

How do you clean turquoise?

As with other magic stones, you should clean and purify turquoise every once in a while so that it remains as effective as possible.

So, to clean this stone, leave it to soak in distilled water for a few hours, preferably in a bowl made of natural materials: clay, glass, metal... Anything is better than plastic, but if that's all you've got, that's ok too! To recharge your rock with positive energy, leave it in your window at night when there's a full moon, or place it on a quartz crystal.

Watch out, turquoise is different than other stones! Unlike other magic crystals, this one can't be left in the sun since it could disintegrate. On the same note, salt could damage this rock.

Turquoise is linked to the third eye chakra which means that it could be an excellent catalyst for those who meditate. This means that it allows positive energies to manifest themselves and this could help to prevent mental blocks.

This rock is also connected with the throat chakra which eases communication, interpersonal relationships, and is valuable for those that are always using their voices. For example, teachers, speakers, business people, singers... It also helps to reduce the stress associated with public speaking and helps those who do this to get started.

Which zodiac signs could benefit from turquoise?

Out of all of the magic stones that help specific signs, turquoise is the one that helps the most. So, in this case, Libra, Gemini, Pisces, Sagittarius, Aquarius, and Scorpio reap the most benefits of this mineral.

Some fun facts about turquoise

Since this stone is so rare, it has always been a symbol of wealth and prestige. That's why it's no wonder that the mortuary decorations of Ramses and Tutankhamen were encrusted with this magic stone.

Turquoise is supposedly the stone of eternal youth as well as travellers since it protects you when you're on the go. With this in mind, your car would be the perfect place to have one of these rocks.

Turquoise has been used in jewellery for thousands of years since it is a relatively soft stone that is easy to work with. In ancient times it was used to protect against the evil eye, as a decoration on turbans, and even as a marker on rings. Now, in modern times, this stone can be found in any kind of jewellery like rings, earrings, pendants, etc. In traditional Tibetan jewellery, it is common to see a combination of turquoise and coral.