The Nine Muses of the Greek Mythology

Find out the Greek muses of the arts, music, poetry, theatre and astrology. 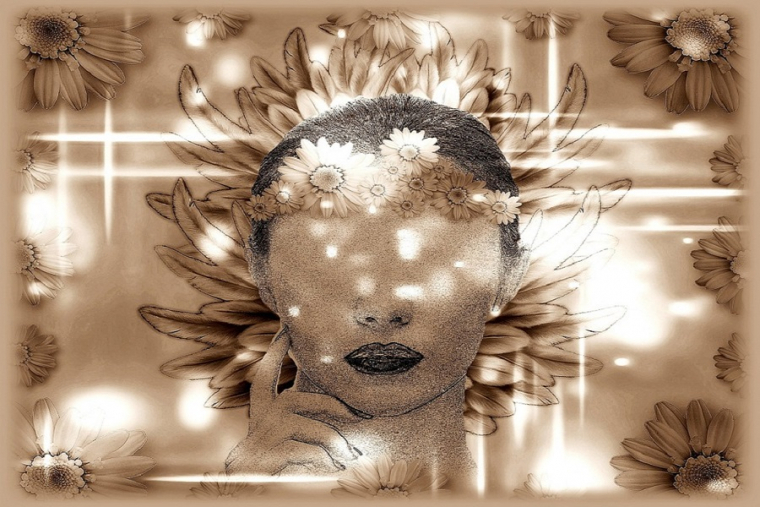 The Nine Muses of the Greek Mythology

'Muse, tell me of the man of many wiles...'. Thus begins Homer's Odyssey, a classic work that is considered the founder of Greek mythology and classical civilization. But who are those muses that whisper in Homer's ear the exciting story of Ulysses' return home? We tell you all about the Greek Muses.

Zeus, the father of all gods, and Mnemosyne, the goddess of memory, conceived for nine consecutive nights nine muses that have the gift of offering inspiration, each in their field. The three original muses are Aoide (voice and song), Melete (thought and meditation) and Mneme (memory). 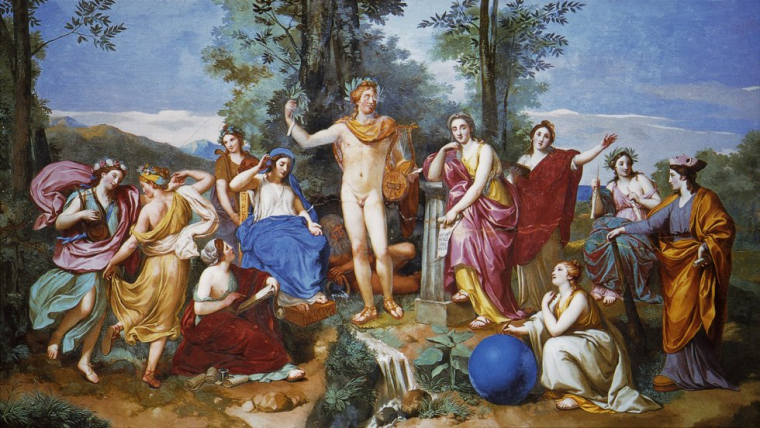 Muses live on Mount Olympus encouraging the gods and also go down to earth to inspire humankind.

Then they were expanded to nine and Hesiod gave them their name. In Greek mythology, the Muses are companions of the retinue of Apollo, god of music, poetry, and arts, and come down to earth to whisper and inspire ideas to those who invoke them. It was Plato who turned the Muses into intermediaries between the intellectual creator and the gods for the production of work.

Since then it has been considered that by invoking the Muses, artistic creators have more facility to find ideas and inspiration. The cult of the Muses was essential for the development of the arts in Ancient Greece and received the attention of musicians and poets until the arrival of Christianity and its disappearance.

They dwelled in Mount Olympus, playing instruments and singing at the gods' feasts. They were associated especially with Dionysus and dramatic poetry, but also with the god Apollo, who according to Greek mythology had sexual intercourse with each of the nine muses and had offspring.

Although the invocation of the Muses in our time is only symbolic, in Ancient Greece, the artists really called them for inspiration. Each one was in charge of a particular artistic field. Here are the Greek Muses: 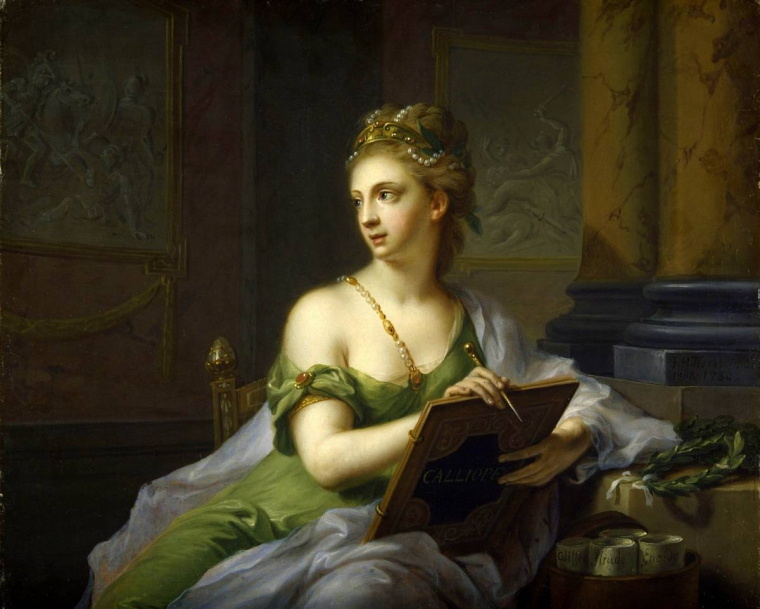 Calliope is the Muse of epic poetry and queen of all other muses.

This girl of majestic air who is represented wearing a golden crown had, according to some authors like Hesiod, ancestry on the others. As a superior Muse, she inspired epic poetry and eloquence, which were two fundamental dimensions in the culture of the ancient Greeks: the Odyssey and the Iliad, for example, are epic poems.

According to Greek mythology, Calliope married Eagro, king of the Thracians, and they had four children: Orpheus, who saved Eurydice from the underworld, Marsias, who challenged Apollo in a musical competition, Ialemus and Linus. However, Calliope is also linked to the god Apollo, and some of her sons are considered begotten by the god of music himself.

Calliope is also relevant for having had a very close relationship with Heracles (Hercules), whom she fell in love with and whom she taught to sing at banquets. 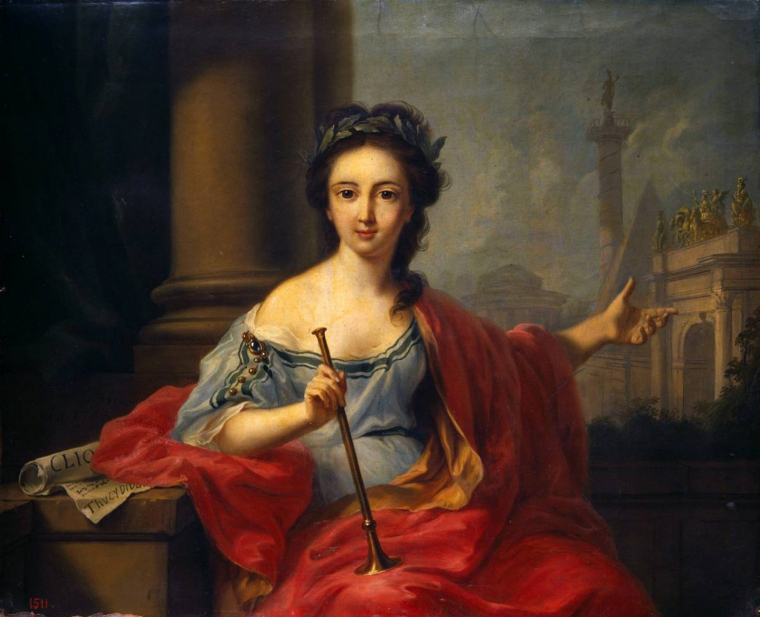 Clio is the Muse of history.

The inspiring Muse of history is depicted as a girl crowned with laurels, with a trumpet in one hand and a Thucydides book in the other. Thucydides was one of the most important historians in Greece, famous for having innovated the historiographic method by recounting his experience as an Athenian soldier in the Peloponnese War.

In some representations also appears the globe and time, understanding history as a geographical and temporal concept. She is related to Pierus, king of Macedonia, with whom she had a son.

3. Erato, Muse of poetry and love 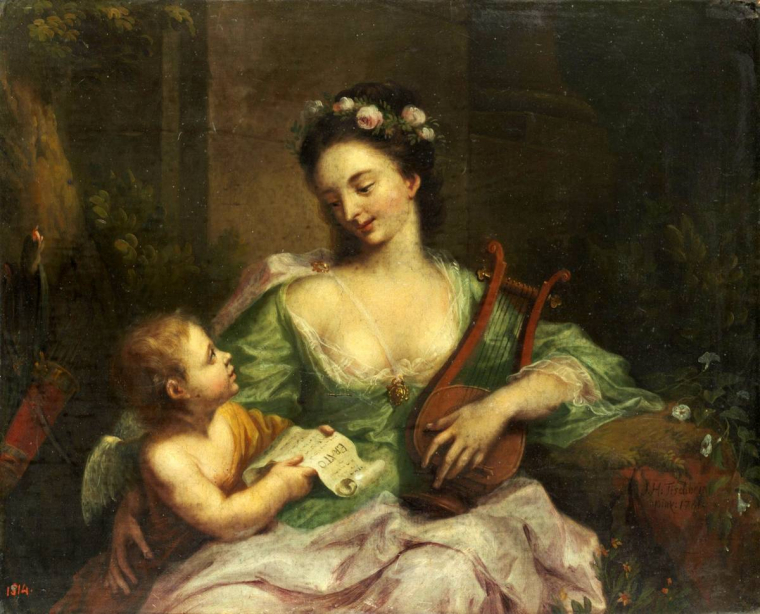 Erato, Muse of poetry, love, and eroticism, takes her name from the god Eros.

The Muse of poetry and love, Erato, takes her name from the god Eros according to the story of Apollonius Rhodius in Argonautica. That is why her representation is most idyllic: in one hand she carries myrtle and roses and with the other a lyre or zither (a stringed instrument invented by Hermes). In some representations, Erato also carries a golden arrow in reference to the god Eros (counterpart of the Roman god Cupid) who joined lovers with their arrows. 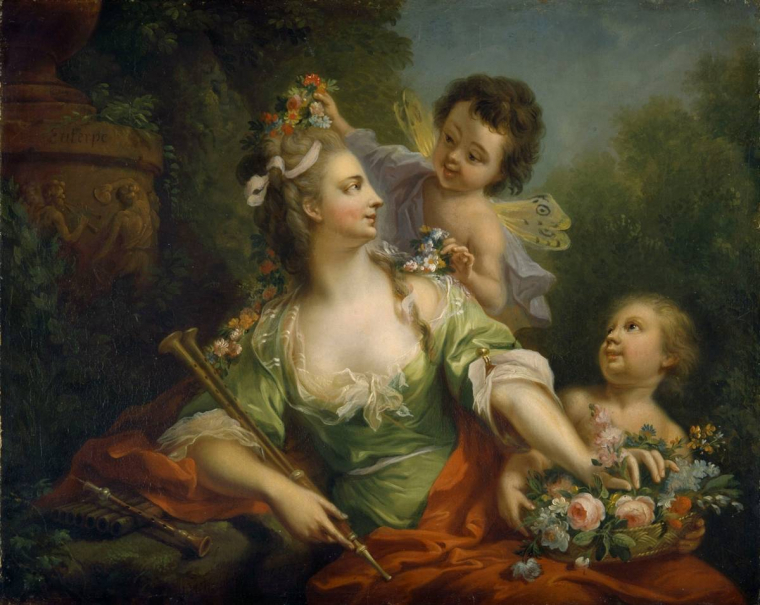 Euterpe, Muse of music, always carries an aulos in her hand.

This muse is considered responsible for inspiring musicians and appears with an aulos in her hand and a crown of flowers. Unlike Calliope (Muse of epic poetry), Euterpe inspires lyrical poetry, and some consider her also the inventor of the aulos, although others grant that privilege to Athena.

Euterpe was pregnant by the river Estrimon and gave birth to Reso, the mythical king of Thrace who died at the hands of Diomedes in Troy (episode narrated by Homer in the Iliad). 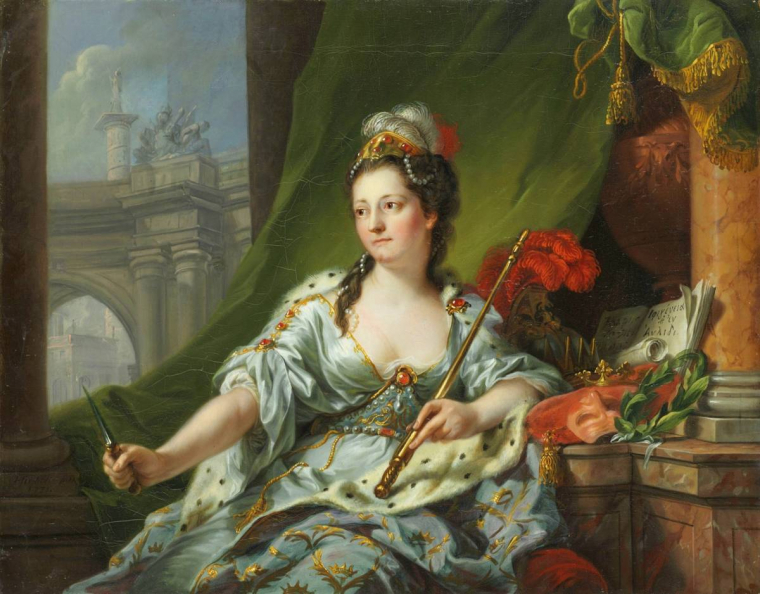 Representation of Melpomene, Muse of theatre and tragedy

Initially she was the Muse of musical harmony, and she went from being the Muse of the song to the Muse of tragedy, so in the end, she became the inspiration for theatre. That is why she was the companion of Dionysus, the divinity of tragedy, and in some mythologies, she is considered the mother of mermaids in union with the sea god Phorcys.

Mythology says that Melpomene had everything any woman wanted: beauty, wisdom and wealth. However, she could not be happy and her life became a tragedy. She is depicted in elegant attire but with a serious face and a severe gaze. In her hand, she holds a mask as the main attribute of theatre. 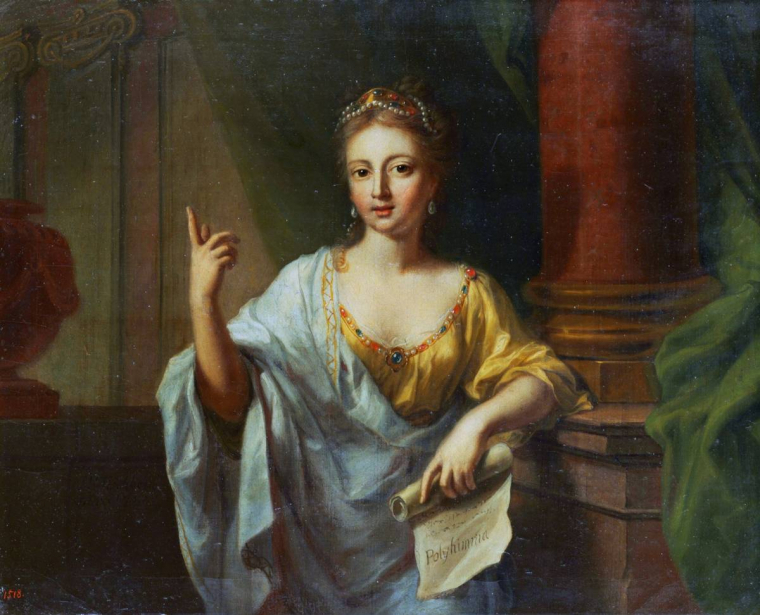 Polymnia is the Muse of the sacred hymns in Greek mythology.

According to Greek mythology, the muse of lyrical-sacral poetry, that is, of hymns, is Polymnia, who also invented lyre and agriculture. As a Muse, she also participates in the inspiration of history, geometry, and dance, but her main attribute is to offer ideas and inspiration for the composition of sacred pieces.

She is usually depicted as a woman dressed in white resting an elbow on a pedestal and putting a finger in her mouth as a sign of meditation. Sometimes she also wears a veil, symbol of sacredness and purity. 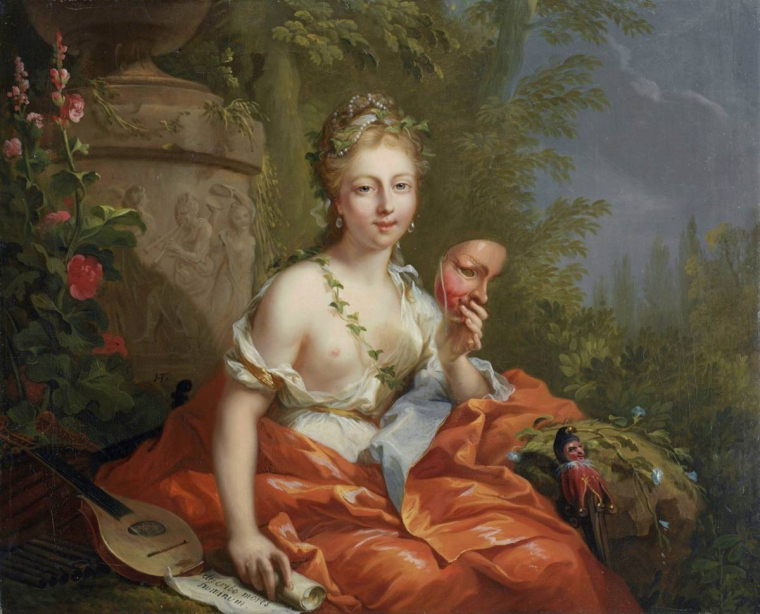 Thalia is one of the Muses of theatre, in this case, representative of comedy.

She is depicted as a vivacious and laughing girl with a funny look, wearing a mask and an ivy crown on her head. She had a relationship with Apollo, and both gave life to the Korybantes, dancers touched with a helmet that danced honoring the Phrygian goddess Cybele. 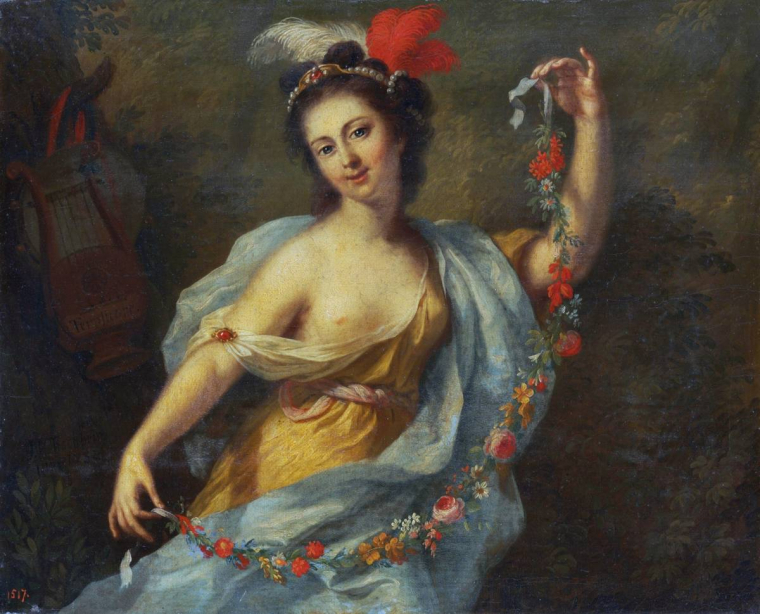 Terpsichore, Muse of dance, is an agile and slender lady.

Greek mythology considers the slender, agile and jovial Terpsichore as the Muse of dance and choirs. She is depicted as a girl with harmonic lines played with a wreath of flowers and carrying a lyre in her hand.

In fact, in her origin, Terpsichore was a nymph linked to nature, and in some versions, she is considered the mother of mermaids. However, in most of the texts she appeared as one of the nymphs begotten by Zeus and Mnemosyne, and finally, she consolidated herself as the inspirer of dances, a discipline that was also very important for the Greeks. 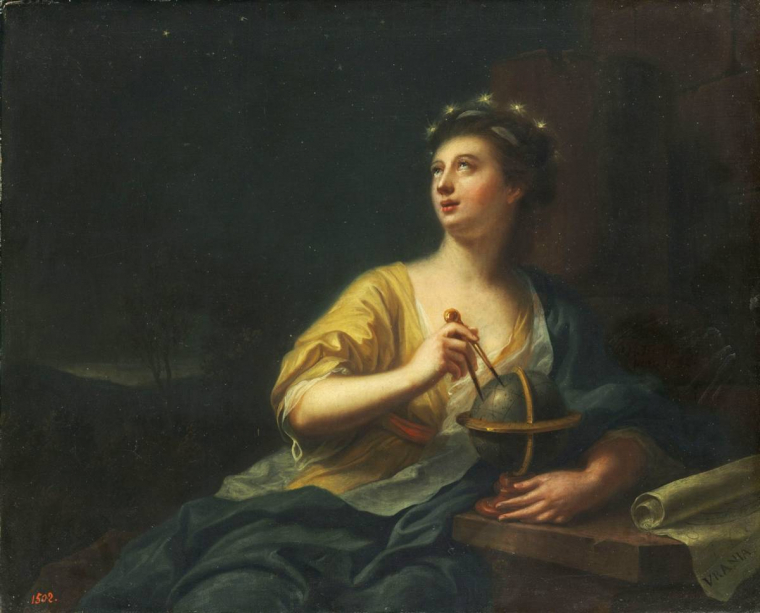 Ourania is an inspiring Muse of astrology and astronomy.

This is the younger of all Muses and specifically inspires astronomy and astrology. That is why she is represented in blue clothes, which resembles the blue of the sky, and wears a crown formed by a group of stars. The development of science was also very important in Greece, for which she was a very revered muse.

As the Muse of astronomy, Ourania is a name attributed to several observatories in Berlin, Vienna, and Zurich, for example. It is also a name widely used in esotericism and astrology. She had a relationship with Apollo and gave life to Linus.

One of Disney's classics, Hercules, incorporates the Muses' characters in an original staging that captivated the audience with their dances. The film premiered in 1997 and was a total success, not only for its artistic execution but also for the charm of its inspiration in classical mythology.

Within the list of characters that accompany the hero, Hercules, in his adventures are the Muses, which although in mythology were nine, in the film are five: Calliope, Thalia, Clio, Terpsichore, and Melpomene.

In the movie, they are always surrounded by music and dance. For example, they interrupt the story of Hercules at the beginning of the film for being too dramatic and cheer up the scene by singing about the defeat of the Titans at the hands of Zeus in the musical 'The Gospel Truth'. They also sing the exploits of Hercules in 'Zero to Hero', and sing along with Megara in 'I Won't Say (I'm in Love)' when she realizes she is in love with the hero.

When at the end of the film Hercules is proclaimed a hero, they star in the song 'A Star is Born'. Fun fact: the Spice Girls were suggested to sing the Muses' songs, an idea that at the end was discarded.