Discover the origin of the dragon, their main characteristics and much more

1
What is a dragon?
2
Where can you find a dragon?
3
6 Strange facts about these mythical creatures
3.1
1. What colour are dragons?
3.2
2. Dragons and Christianity
3.3
3. Animals represented by the Chinese dragon
3.4
4. Why do they spit fire?
3.5
5. Dragon legacies
3.6
6. Dragonology, the science of studying dragons
4
Read all about other Mythical Creatures 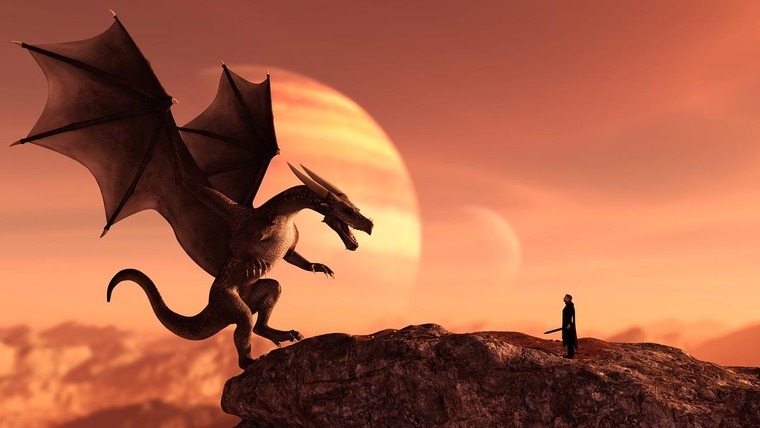 What are dragons? Six strange facts about these mythical creatures. |

Dragons appear in paintings and images all over the world, sculptures and frescos depict them as mythical creatures that have fascinated humans since the beginning of time. Discover everything about dragons in this following article, from their eating habits, main characteristics and many more exciting facts.

What is a dragon?

Dragons are fantastic, mythical creatures that inspire our imagination but also fill us with dread. The name comes from the Greek drakon, and it means 'penetrating gaze.'

The dragon is a large, serpent-like creature, with wings similar to those of bats or flying foxes, capable of breathing fire which they mostly do for protection. They're also described as having above-average intelligence.

The fact that dragons are seemingly reptiles makes their categorization a little complicated at times.In ancient Greece, for example, dragons were known as giant snakes with legs that could also live in water.

As mythical creatures related to reptiles,dragons are oviparous (they produce young by laying eggs) and base their diet on fish and various mammals (ranging from polar bears, seals, cattle, hippopotamuses, and sometimes even humans if they feel threatened).

Where can you find a dragon?

According to most fantastic stories and myths, the natural habitat of dragons is in caverns and grottos, where they live a solitary life.

Dragons choose spacious yet isolated caves that act as hiding places for their great treasures which they're extremely passionate about. There isn't a more desirable bed for a dragon than one made of gold and precious gems. Some dragons were said to have possessed red or white crystals, capable of extraordinary deeds.

On the other hand, it's worth mentioning thatdragons are extremely popular in Asia, where people worship dragon statues, especially in China, Japan, and Korea.

There is a strong connection to the Chinese zodiac, and those born under this sign will enjoy riches and power due to the influence of the dragon.

We also have to mention the European dragons featured in legends across Greece, Germany, and Great Britain, although in these areas the mythical creature almost always has a negative reputation, that of a terrifying and destructive monster.

Although both the Asian and the European dragon traditions emerged independently, with the passing of time and proliferation of their concepts, the two kept adding to each other's mysticism which resulted in many shared characteristics.

We also have to acknowledge the Pre-Colombian dragons from Latin America, which had one main difference compared to their European or Asian cousins: they had feathered wings.

6 Strange facts about these mythical creatures

Ready to find out everything about dragons?

1. What colour are dragons?

The dragon's skin colour depends on whether it has good or evil intentions. Therefore, friendly dragons will be golden, silver, ochre, bronze or copper-coloured. If, however, the dragon is red, black, blue, green or white, we can start making a run for our lives.

Although the word 'dragon' evokes images from China, this mythical creature is present in Christianity as well. In the Book of Revelation,Saint John speaks of a seven-headed dragon, with ten horns and seven royal crowns on his heads, which symbolized the end of the world.

During the Middle Ages, dragons were a marker of sin, heresy, apostasy, and even of the Devil himself, which is why saints were commonly depicted as slaying dragons. The most famous legend talks about Saint George, a horseman that tamed and killed one of these mythical creatures.

3. Animals represented by the Chinese dragon

The Chinese dragon has certain features that differentiate it from its European counterpart, and the result could be labelled as a zoological hodgepodge. This dragon fused characteristics from lobsters, deer, camels, dogs, catfish, lions, snakes, and eagles.

This is a common attribute of mythical creatures, bringing together elements from different animals. An example would be the unicorn, which mixed body parts from a horse, a baby goat, and an antelope.

Given their mythical nature, the most straightforward explanation is simply because they can; just like trolls turn into stone by daylight and vampires die from anything silver.

There is a theory, however, that claims dragons spit fire because they have a stone lodged in their throats that produces sparks. They're also believed to have a gland that releases a flammable gas which produces flames in contact with air.

Usually, dragons are depicted as creatures that used to live alongside humans and taught us many useful things related to art, astrology, and medicine. In fact, the pharmaceutical symbol features a great serpent which could very well have a connection to dragons.

6. Dragonology, the science of studying dragons

The colossal impact that dragons have had in popular culture (as well as in ancient ones) meant that in 1958 a new science emerged, called dragonology that was responsible for the study of dragons. This new study of creatures debunked the romantic image we had of dragons; it states that having four legs and two wings is anatomically impossible and that for it to fly, it would have to weight less than 25 kilograms. Dragonology also claims that instead of spitting fire, dragons were more likely to kill using a potent venom, similar to that of serpents.