Discover what Dwarfs are, what their origin is and where to find these mythological creatures.

1
What are dwarfs?
2
Origin of the legend of these mythical creatures
3
Where can we find dwarfs?
4
Six strange facts about these mythical creatures
4.1
1. Bearded women
4.2
2. A strong relationship with nature
4.3
3. What is the lifespan of a dwarf?
4.4
4. Difficult personality
4.5
5. Can dwarfs change size? What about skin colour?
4.6
6. Dwarfs in popular culture
5
Read all about other Mythical Creatures 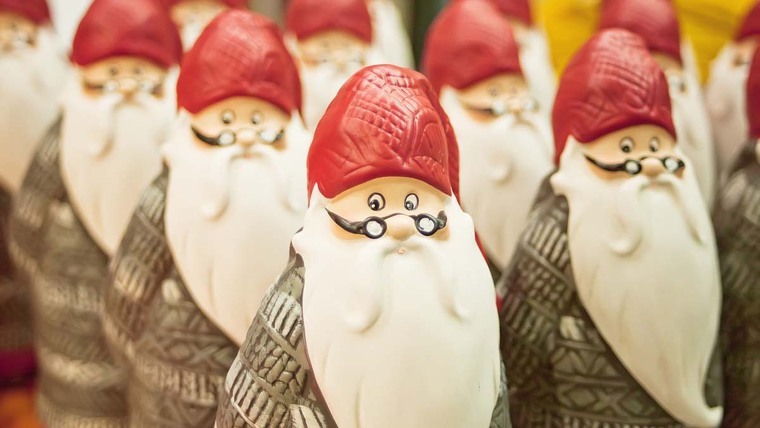 The term "dwarf" can be used to refer to a person suffering from dwarfism, a medical condition that can be caused by achondroplasia, by congenital iodine-deficiency syndrome (previously known as cretinism) or by a deficiency in the growth hormone, among other causes.

However, we also use this term to identifycertain magical creatures, that much like gnomes and elves have a human-like appearance, the only difference being that they are shorter.

If we are speaking about dwarfs as magical creatures we could define them as short, human-like characters that appear in many stories and legends all around the world. Generally, they measure around 1,40 meters in height or less, they are very sturdy (almost as wide as they are tall), and they tend to wear a bushy, plaited, well-groomed beard that they sometimes decorate with jewels.

Origin of the legend of these mythical creatures

Similarly to other magical creatures, the primary references relating to the existence of dwarfs were found in Northern Europe, specifically in the Northern culture, where they have their own beliefs and religions which they fervently practice.

The dwarf village was created by the god Odin and his brothers Vili and Ve, by using the larvae that were eating away at Ymir the Giant's dead body and endowed the dwarfs with human appearance and intelligence.

Where can we find dwarfs?

The region of Scandinavia possesses a solid tradition when it comes to dwarf legends, and presents them as creatures that are related to rocks and the underground, as well as with luck and, sometimes, with magic as well. In fact, when they are presented as not having any magical powers, they tend to have the ability to deflect any curses and hoaxes.

Usually, they live underground (where they were banished for being too ugly), in passages they dug themselves inside a rocky mountain. They are extremely wise and master arts and technology, such as architecture, mining, and forging.

Although the northern ones are the most popular, these creatures can be found in many places around the world: Russia, Norway, India, China, Japan, Africa, and Pre-Columbian America.In these areas, they are related to birth, death, fertility, and forging. In the Mayan culture, for example, the dwarfs' role was to accompany the dead into the afterlife, as they are depicted on numerous ceramic artefacts.

How much do you know about these magical, fun-loving creatures? Discover many strange facts about their existence!

Earlier we mentioned the dwarfs' luscious beards as one of their main characteristics, the curious thing, however, is that both men and women have facial hair and sometimes it's difficult to tell them apart. Speaking of beards, there is nothing more humiliating for a dwarf than having his cut off!

2. A strong relationship with nature

For some researchers, dwarfs, similarly to fairies, gnomes or certain mythological gods, represent the personification of natural elements, spirits of the earth and hills, which in Northern mythology assume human form.

3. What is the lifespan of a dwarf?

These magical creatures do not have a predetermined lifespan and this will usually depend on the legend or novel they are featured in. In some cases, they live up to 40 human years while in others more than a century.

Dwarfs live under the earth's surface and generally speaking they do not get along with any of their co-inhabitants. Despite their difficult character, they will engage in trading with their neighbours. Among their sworn enemies we can find trolls, orcs, and gnomes.

Dwarfs do not take trading lightly: they are crazy about gold, and not because of greed or the desire to hoard it. Records say that once a dwarf sees or senses this precious metal, he will not be able to resist finding it. They are no thieves, mind you! Having said that, they do enjoy amassing fortunes in colossal rooms dug underneath mountains.

5. Can dwarfs change size? What about skin colour?

Certain Scandinavian legends depict dwarfs as having quite a strange ability: they could change size anytime they wanted, as well as the shape of their entire body. There isn't anything specifically mentioned about their skin tone. Thor, the god of thunder, used to make fun of them for being deathly pale while in some texts, dwarfs are described as having a darker skin complexion.

In his saga ''Lord of The Rings'', Tolkien imagined a fantasy race that identified as dwarfs but was different to the ones in the Scandinavian culture. These creatures are presented as friends of hobbits and they tend to be non-competitive.  Their main settlements were The Seven Dwarf Mansions and Gimli, Thorin, Balin or Telchar are mentioned among Tolkien's most famous dwarfs.

The story ''Snow White and The Seven Dwarfs'' however, shows dwarfs not as magical creatures but as short people (despite the story having supernatural traits, such as the witch and her spells). They do retain some of their magical characteristics in regards to their occupation. They used to excavate the mines and in Walt Disney's movie, instead of being passionate about gold they were crazy about diamonds.

Aside from ''Snow White'', there is another dwarf that the Grimm brothers made famous, and his name was Rumpelstiltskin. One of his skills was to turn straw into gold, this magical race's favourite metal. Sometimes though,  Rumpelstiltskin is associated with an elf. There are many books, stories and video games such as  'Dungeons and Dragons', ‘South Park’, ‘Warhammer’, 'The Chronicles of Narnia’, ‘Saboteur’ or ‘Warcraft’ in which dwarfs, if not portrayed as main characters, would still have an important role to play.