Find out what unicorns are, what their origin is and the main traits of this mystical creature. 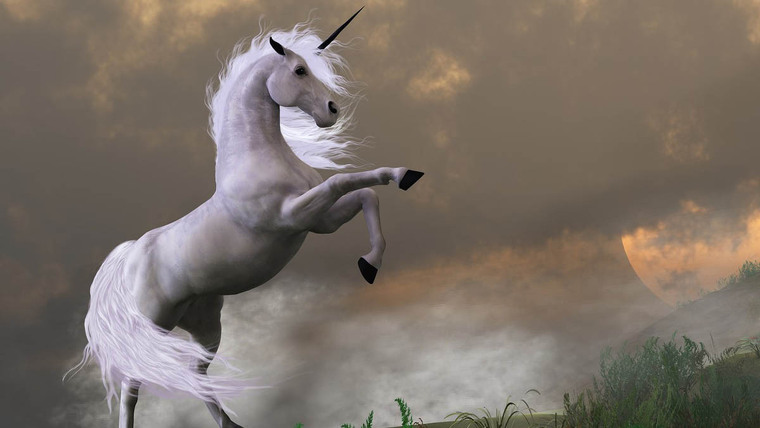 Unicorns are the most beautiful mythical creatures imaginable and they're portrayed in popular culture as ambassadors of peace and hope. The unicorn myth originated in Asia and soon spread to the rest of the world.

Unicorns are mythical creatures that embody the image of several animals. Traditionally, these creatures had the body of a white horse, antelope hooves, a great spiral horn on their heads (also known as an alicorn), and sported a billy goat beard. The unicorn's tail was either that of a wild boar or a lion.

As years went by, however, the image of unicorns changed and nowadays they're represented as beautiful steeds, whose only peculiarity is thehorn mentioned above. Sometimes they were depicted as having a buck's head.

In this respect, the unicorn's evolution could be compared to that of mermaids which are now described as mythical creatures with a human torso connected to a fishtail but had initially been represented as having the lower body of a bird.

Unicorns are believed to be pure animals, impossible to capture.

Where can we find unicorns?

The world is full of legends about these mythical creatures. In Asia, there are ancient records of creatures with similar traits, especially in Persia, India, and China. Similarly, a Spanish myth talks about a golden unicorn whose horn was coveted by many.

The natural habitat of a unicorn would have to be quiet forests, spacious enough to accommodate its wingspan, especially if it's in an area where moss is found in abundance.

How much do you know about these mythical creatures? Discover all the exciting facts about the world of unicorns!

1. What does the horn symbolize?

This mystical horn represents both masculine and feminine energy: it's seen as manly due to its phallic shape and womanly because of the spirals that resemble seashells and evoke female sexuality.

Although historians haven't always agreed on the unicorn's appearance, there is a consensus regarding the mythical powers that these creatures possess.

Among others, unicorns had healing powers and could part seas, which made it a true symbol of magic and mystical inspiration for many literary and fantastic fiction. Pliny the Elder, Plato and Aristotle, among others, have dedicated extensive pages in their writings to unicorns.

3. What do unicorns eat?

Considering that they're peaceful animals, their diets are not centred around hurting other beings, or humans. It is believed that they eat fruit and cereal, especially if found on easily accessible overhanging branches. They quench their thirst with river water, in waterfalls and other places with running water.

During the Middle Ages, unicorns were portrayed as strong, mythical creatures that became dangerous once you tried to look for them and many painters and artists of the times were inspired by the one-horned animal. Among the painters that featured unicorns in their work, it's worth mentioning Raphael's "Young Woman with Unicorn."

This painting has a rather interesting history, considering that Raphael initially painted a dog (symbol of fidelity) which he later turned into a unicorn (reasons remain unknown). The unicorn, however, wasn't discovered until a 20th-century restoration which removed the wheel, cloak and palm frond that had been added by an unknown painter during the 17th century. The subject of the painting has since been identified as Saint Catherine of Alexandria.

5. Remains of a Korean unicorn

In 2012, the existence of unicorns came to light after centuries of being only mythical creatures. A North Korean news agency informed that archaeologists had found a unicorn lair and the remains of a unicorn ridden by the ancient Korean King Tongmyong.

Media outlets focused more on the unicorn and less on the agenda of Kim Jong-un's totalitarian regime, which had intended to claim that the city of Pyongyang was founded on the ruins of the most important city in Koren history, Gojoseon. There were in fact unicorns found in those caves, many of them painted on the walls.

6. Unicorns and the Bible

Similarly to many mythical creatures, like the giants, the Bible has references of unicorns although it could be a result of a mistranslation. Therefore, unicorns are mentioned in the Book of Jacob, the Psalms, the Book of Isaiah and the Book of Numbers. Sometimes, instead of a unicorn, there were mentions of rhinoceroses, bulls, oxen, or bison, because the word used references a mighty animal.

This is the origin of the many stories revolving around the unicorn's strength: it was believed that a unicorn could defeat an elephant many times his size. The unicorn's elusive nature is also mentioned, and no matter how tight the ropes or clever the traps, it still managed to escape the hands of men.

Furthermore, unicorns are related to the concept of Christianity and depicted in a few paintings, the most noted one being Moretto da Brescia's " Saint Justina with the Unicorn, Venerated by a Patron."

When we mention unicorns, we think of the classic white horse with one horn, but if we have a closer look at world history and culture we'll discover many mythical creatures that are described as having a spike in the middle of their heads. A notable mention would be the Asian qilin, a one-horned mythical creature.

Greek mythology references a creature known as Oricuerno, Alicornio, Unigaso or Pegacorn, which represents a winged unicorn (including winged hooves). Chilota mythology also features the camahueto, a sea creature that has the shape of a bull with a small horn on its forehead.