Thor: Odin's Fearsome Son and the Norse God of Thunder

1
Thor, Odin's son in Norse mythology
2
What's Thor like? The personality of the god of thunder
3
Mjölnir, Thor's hammer
4
Marvel and other fictional representations of Thor 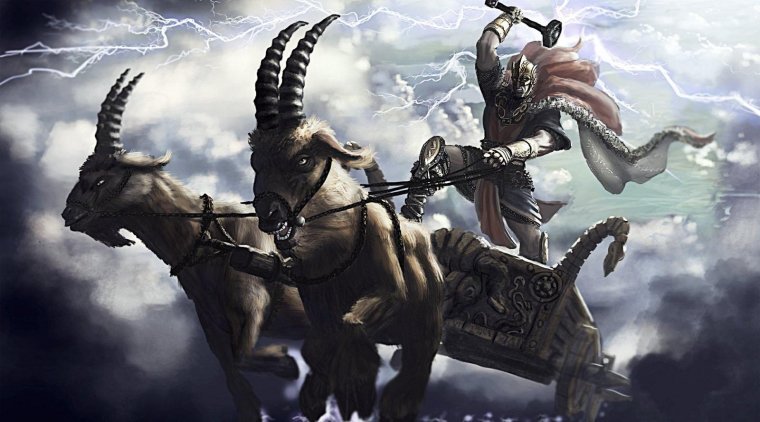 Thor: the god of thunder in Norse mythology |

Norse mythology gives Thor, the son of the supreme god Odin, a privileged position in the pantheon of deities. He's the god of thunder, but also embodies justice and makes harvests easier through controlling the weather. For many centuries, he has been a beloved god in the peaceful rural living areas of craftsmen and peasants, until Marvel turned him into a fictional superhero to launch him to fame.

In Norse cosmogony, which is polytheistic mythology, at the top of the pantheon lies Odin, who led gods to victory in the battle against giants by killing and defeating Ymer the giant. The supreme god joined the goddess of earth, Fyorgyn, and they birthed several gods, among which stood Thor.

While his brother Balder represents light, peace and forgiveness, Thor is temperamental, wrathful and aggressive, a lover of war who embodies power and strength. Still, he had a fairer, more moderate personality than bloodthirsty Odin. This fact made him a highly respected and beloved god by the Norse people.

Thor married Sif, the goddess of harvests and fertility, and they birthed three gods: Magni, Modi and Trud. In fact, as the god of thunder, Thor himself had a certain descent over harvests, and their bond represented the connection between heaven and earth that results in abundance.

Thor dies in what's known as Ragnarök, the final fight between ice giants and gods (Ragnarök means "the fate of gods"). He fights against a giant horrid snake, Jörmungandr, who he kills with his hammer, but after taking nine steps back, he dies infected by the poison.

What's Thor like? The personality of the god of thunder

Thor is one of the most complex gods in the Norse deities' pantheon because he influences several areas: he's the god of thunder, the manager of weather, the protector of battles, embodiment of justice and harvest provider. Despite his protective role in battles, he is represented as a fearsome warrior.

The main attributes through which Odin's son is represented are Thor's hammer, which we'll mention later on, and a cart pulled by two male magic goats, Tanngrisnir y Tanngnjóstr. They had the ability to be instantly reborn, and took Thor anywhere from his fortress of Bilskirnir, in Asgard.

In one of the epic poems of Norse mythology, it is told that Thor spent the night at a peasants' home, and to quench his hunger, he ate the two lambs. They were reborn the next morning, but one of them was limping until Thor found out that one of the children in the home had broken one of the feast's bones, which enraged him deeply.

In popular iconography, Thor is shown as a strong deity with long blond hair, fighting ice giants by making his way through with his hammer and shooting deadly rays with great precision. Still, he was a justice-bound god, and that is why he was well-known in peaceful rural areas amongst craftsmen and peasants.

One morning, Thor awoke in a fit of rage and fury: someone had stolen his hammer while he slept. His brother Loki claimed the giants did it, so he wore goddess Freya's feathered suit and flew to the Ice Kingdom. There, he found out that the thief was King Thrym himself, who asked him for Freya's hand in marriage in exchange for the hammer.

Thor agreed while he planned to trick him. On the wedding day, Thor dressed in Freya's suit and covered his face with a veil, and at the banquet, he revealed himself and unleashed his fury with thunder and hammerfall. Despite Thrym begging for mercy, Thor destroyed the entire place and ended up killing the king of giants himself.

Why was Thor so nervous upon seeing his hammer had been stolen? Norse mythology channels Thor's power through his hammer, called Mjölnir, also known as "Thor's Hammer". It possessed unique powers among which stood shooting thunder, so Thor himself used iron gloves to wield it.

The Mjölnir hammer, with a short handle and large head, was forged by dwarfs Sindri and Brokk. According to Norse Mythology, dwarfs are the masters of the underground magic world. That's where the power of this deadly weapon comes from. Its structure is so heavy, Thor has to wear a magic belt to double his strength.

Later on, Mjölnir remained as the image of the god of thunder and was revered as a sacred symbol by Vikings, and as an icon by Germanic paganism and the Northern peoples. Some believe that the real hammer was found in a northern region.

Marvel and other fictional representations of Thor

As early as 1962, in issue 8 of the Journey into Mystery magazine, there was a 13-page comic feature with an original story: doctor Don Blake finds a magic staff in a cave which transforms him into Thor, and offers him his hammer, with which he must stop the invasion of Saturn's Stonemen.

This was the first comic representation of Thor, a character who has inspired many fictional stories, and which was a true bonanza icon for the Marvel superhero movies. He was considered the 14th most important hero in the history of comic books, and the 1st among the 50 best Avengers.

The fact that Thor is in fashion comes from actor Chris Hemsworth, who gave him a face during all these years since the release of the first movie, Thor, back in 2011. This story of the Asgardian throne heir who must stop the ambitions of his brother Loki from a situation of forced exile cost 150 million dollars and raised 440 in return.

A blockbuster which made room for a 2014 sequel: Thor: The Dark World. Since then, Thor has appeared as the main character in other movies of the Avengers saga, and in 2017 he starred in a solo movie once again, Thor: Ragnarök, which became the biggest success in the trilogy by raising up the profits to 800 million dollars.