Find out about the 22 cards and what they mean 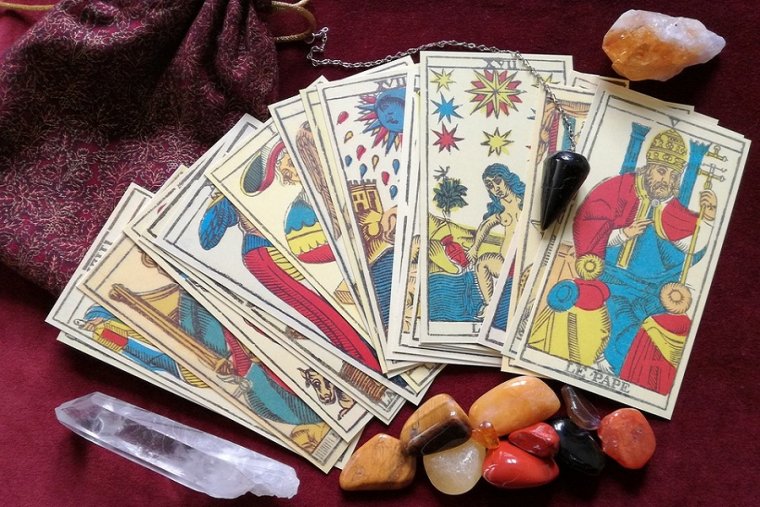 The Tarot of Marseille is one of the most widespread ways of reading the future of a person by people who love the divination arts. Already in the thirteenth century, its use is recorded and consists of a deck of 78 cards divided into major and minor arcana.

The major arcana are the most used by people who start in the fortune-telling, and it consists of 22 cards that offer a basic picture and allow giving a general answer to an issue.

The polarity of the card depends on several factors, since all the arcana have a positive, negative or neutral meaning, depending on the position on the table, the other stamps it has around it and whether it appears face up or face down.

So, let's find out which the 22 major arcana are and what they mean.

We tell you the meaning of each card that make up the 22 figures of this special deck.

Arcanum I: The Magician

It symbolizes youth, creativity, dynamism, and novelty. This Arcanum shows us that the universe is a formidable cosmic game, a reality, an illusion, a projection of our conscience.

It symbolizes wisdom, experience, knowledge, secrets, and fertility. It's represented by a priestess holding an open book in her hands. This object is the symbol of revealed knowledge, of the transmitted, transcribed and preserved knowledge that remains within reach of all of us.

It represents intelligence, power, intuition, and communication. The Empress is the emotion that keeps a soul alive, who encourages it, who makes it move. She's the intelligence of life and power, de good instinct. It's a picture, the empress has a shield in her right hand and where you can see the imperial eagle, which symbolizes de sacred fire, strength and courage.

It symbolizes construction, responsibility, courage, stubbornness. This major Arcanum concretizes the creative emotions of the Empress. The emperor imposes his law firmly, and his power is temporary because it only affects the material, concrete and tangible reality of this world. When the Emperor reveals a situation, it is often solid, concrete, lasting and offers many material benefits.

It represents kindness, wisdom, patience, and forgiveness. The Hierophant is timeless since he is the messenger of the gods for men. It plays a role of mediator, intermediary or messenger; he is a great priest whose knowledge and wisdom soothe, liberate or strengthen our bodies and our souls. It exercises three powers: spiritual power, temporal power, power over the rulers of the earth.

It represents sincerity, charm, youth, and love. From this major Arcanum, they no longer represent figures like the previous ones but evoke personalized characters in particular circumstances loaded with meanings. Here, the lovers find themselves in the situation in which the individual surrenders to their natural inclinations, where their heart leads them.

Symbol of success, ambition, dynamism, and mastery. After the lovers have made their choice and have taken a direction, the chariot will be able to demonstrate their courage and strength of character by obtaining the means to achieve their goals, despite the obstacles that stand in their way.

It means balance, stability, gravity and the consequence of acts. The justice represented here is above all the justice of truth and life, without the intervention of moral principles. The number 8 is the cosmic balance, the resurrection, the transfiguration.

It symbolizes longevity, slowness, introspection, and loneliness. The domain of the neutral card. The hermit is a guide; he holds his flashlight in front of his face to show us the path we must follow, although he doesn't look for it, he only shows it.

It represents change, overwork, destiny, and growth. It isn't really a wheel, but a spinning wheel, which was previously used to get water from the well. The relationship between the spinning wheel and the well illustrates the constant movement represented by the tenth major Arcanum. And watch out, because it can move in both directions.

This card from the Tarot of Marseille tells us to learn to measure the consequences of our actions, to be the masters of our destiny. The strength isn't called like that because of the strength that can be exercised on a physical level, but it refers to internal firmness. Strength symbolizes courage, energy, power, and control.

This Arcanum symbolizes waiting, mental block, abandonment, and sacrifices. The Hangman symbolizes the Tree of Life that has its roots in the sky and its branches on earth and allows us to understand that through the sweetness and strength of the love that each one carries within ourselves, we can control our own thoughts and actions, to be free.

It represents the end, the transition, the change, and the remorse. This major Arcanum is about men stripped of his appearances, reduced to the essentials of himself, his truth. This Arcanum number thirteen is often said to be the one that has no name because according to ancient beliefs, to pronounce a name was to invoke what it meant or represented.

It symbolizes communication, protection, adaptation, and concession. Represented by a winged woman who pours water from one vase to another, in reference to the clepsydras, ancient clocks that used water as a measuring unit. Temperance Announces a news or a message, an information that will be revealed and that will allow understanding and communication.

It symbolizes temptation, punishment, desire, and risk-taking. Represented by a devil he raises one open hand and in the other, he holds a sword or a torch, he speaks of the most passionate, creative, productive or destructive human being, ready to use all means to achieve his goals within a situation in which desires, instinct, ambitions, and feelings are exacerbated.

This card symbolizes chaos, defeat, and anxiety. It shows how lightning reaches a tower of a supposed temple of God. It shows how, due to his pride, men sometimes blind. The more one seeks to rise in the physical and material world, the prey of pride, the more one exposes oneself to destruction, to ruin, to divine wrath, as happened in the Tower of Babel.

Major arcana of mysticism, hopes, confidence, and imagination. The card shows a naked woman at the water's edge, who empties two amphorae under a starry sky and represents the meaning of the words to release and reveal. It isn't a matter of freeing oneself from external bonds, but of returning to the normal course of things by circulating naturally in the currents of life, in a perpetual and uninterrupted way.

It represents disappointment, superstition, and lies. The card of this major arcanum moves to the realm of the shadow, in which everything that is hidden, buried in each one of us, and that precedes the light. The message is that we shouldn't be afraid to turn to the unknown.

It symbolizes happiness, peace, satisfaction, and success. This card forces you to abandon yourself to joy, happiness, satisfaction, your spontaneous feelings; to be simply what you are. In any situation, the Sun is a sign of relief and clarification.

It symbolizes openness, discernment, rebirth, and action. This major arcanum announces a revelation (or renewal), a more fair, deep, objective and authentic inner vision of things. It tells us that there is no longer any reason to lie to oneself or hide something from others. It brings healing, relief, reconciliation, and relaxation.

It's a sign of freedom, harmony, achievement, and elevation. The symbolism of this Arcanum implies a global, general and absolute vision of things. Its mission is to convey the idea that each of us carries this world inside. It isn't accessible or illusory or utopian: he is what we are.

Arcanum without number: The Fool

Symbol of choice, dementia, anxiety, and nothing. Arcanum 22, which doesn't have a number, means a sudden, enthusiastic change. A new initiative, a process, a journey, a moment of madness, a movement, a period of transition. It announces that you are advancing or that you are returning to yourself.