Find out the meaning of the ninth Major Arcana card: The Hermit. 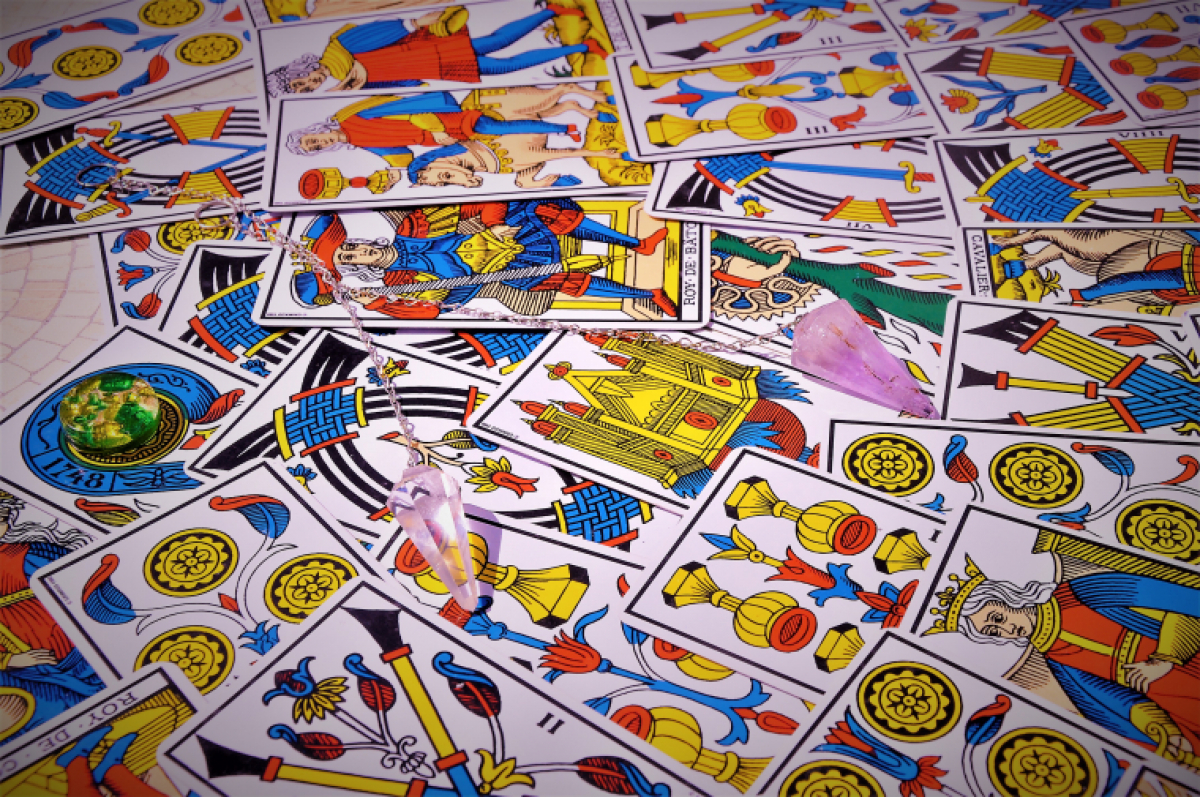 The Hermit is the ninth Major Arcana tarot card. |

The ninth Major Arcana card, The Hermit (“L’Hermite” in French, as it appears in the Tarot of Marseilles), is the great-grandfather of the Magician. He already knows what life is about as well as the rhythm of cycles. He is the utmost representation of wisdom and patience. This character has lived all the experiences of life. His flashlight guides those people who move slowly but surely.

He stands out from the other Major Arcana cards due to the fact that he represents a step into the unknown. In this sense, the meaning of this tarot card suggests both a great wisdom and a state of serious crisis. He is about to discover the great truths of humanity.

Has The Hermit appeared in a tarot spread of love, money or health? Here you can find all the answers to your questions. The past, present and future are now in your hands. 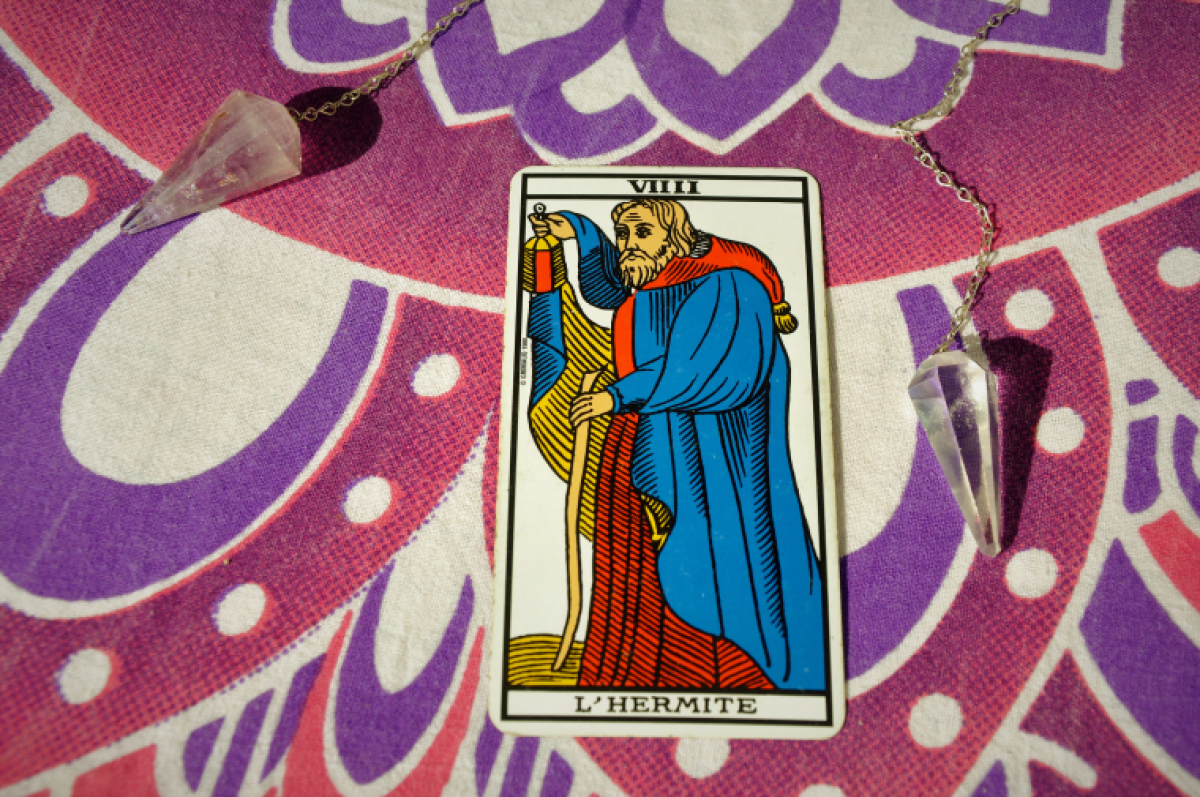 The Hermit (IX) is knwon as "L’Hermite" in the Tarot of Marseilles. |

The knowledge acquired by the Hermit allows him to guide the lost souls. The long cloak hides a great ability for controlled and well-considered action. Time carries out its task.

The light he bears can be considered as a symbol of knowledge. He lifts the light up, illuminating the past, since he is a man of experience. This light could be a secret knowledge, kept for the initiated or, on the contrary, a source of wisdom offered to the disciples who look for it. Just as the tarot card shows an ambiguity between action and reception, this light can be active, as a call to awaken the consciousness of the other, or receptive, as a traffic light. Like the High Priestess, the Hermit is a very secretive character.

This ascetic man shows a certain coldness, which is the inner loneliness of the initiate. The numerous hatching that shadows his clothes can be interpreted as the mark of his great experience. His hunchback contains, in a concentrated way, all the memories of his past.

On his forehead, there are three wrinkles that reveal his mental activity. His gaze is lost in the distance.

Both poor and rich, he launches an appeal to that part of you that can be eternal and encourages you to go through the crisis with courage, to move forward even though you do not know where you are going.

In an upright position, this tarot card represents positive crises. You do not feel lonely, because this is a condition to receive the right guidance from within yourself.

The soul knows how to manage time well and when it should stop. Time does its job and provides solutions. After all the experiences, you acquire great prudence and even a certain chastity. You already know about attraction and sexuality, so you should direct your mental energy to more important issues. You have a clear understanding of the world.

It also means that you go through a period of organisation, in which you must be determined and meditative. This is all due to reflection and a willing isolation. Sometimes, in order to be able to listen to yourself, there is no other way than to stop listening to others.

In the reversed position, you fall into doubt and despair. This Major Arcana card is quite bitter. It indicates strictness, greed, as well as excessive shyness.

Alcoholism may appear in your life, since the flashlight resembles a bottle! His physical appearance causes some rejection, since it tends to look rather old-fashioned. He rejects modernity, which creates problems. Fear of youth. By all means, you have to work on your growth and on being more extroverted. It also indicates a loneliness endured in silence, which is not welcomed.

If it appears in a tarot reading, it may refer to an absent, silent, distant or missing parent. Other people to whom he can allude are: the wise men that come into your life, therapists, midwives (together with the Pope) because it symbolises birth, researchers, the elders or those people related to them or to death.

It also refers to inner solitude of the querent. It points out the secret and gloomy place in which the spiritual transformation is carried out.

The Hermit is a figure that slows down the pace of a tarot spread. This Major Arcana card appears in that time of your life when consideration prevails over action. The Hermit is often unappreciated. When he is in a reversed position, he is a factor that slows down evolution.

Loneliness is preferred, as well as celibacy, which helps you purify and renew your soul from time to time. Thus, selfless, platonic love can happen, in which self-sacrifice and altruism are the most important aspects. A teacher or guru appears in your life to teach you about a more mystical and universal love.

In case you have a partner, this person may be of a certain age and your relationship is more intellectual than sexual, since it is very philosophical-oriented. Your relationship is based on “quality” rather than “quantity”. There is a desire for responsibility and duration when it comes to the relationship. If there is any sexuality, it is reasonable but devoid of passion.

In the reversed position, you are afraid of the opposite sex, as you are shy or not very passionate. The Hermit reversed also deals with issues, such as impotence, lack of external communication, hard labour (together with the High Priestess), or even a certain tendency to escape from reality. Feelings, even if they exist, remain hidden. As the physical appearance is dishevelled, it is very difficult to seduce and win someone’s heart.

Patience and determination are fundamental, and luckily, you count on them. The Hermit can also represent retirement. At work, seriousness and discretion as well as experience are valued. The advice of the ninth Major Arcana card is to get out of your shell and make yourself known in the job market. Development is slow but it will be successful.

The Hermit reversed indicates a period of stagnation, fear, shyness and lack of sociability. Unemployment can make you think that you will not be able to find another job. So, you must fight this anguish in order to face the world.

When it comes to finances, in the upright position, it points out a stable personal economy, although it is due to having few expenses rather than earning an adequate income.

In the reversed position, you are going through great financial difficulties and, often, you have to face them alone. There can also be greed and it is hard to know how much money the couple has, since they are quite reserved.

In questions about health, this tarot card indicates the aging of the body or possible bone problems, especially of the back when it appears together with the Emperor. You have problems walking, as well as with digestion or deafness. 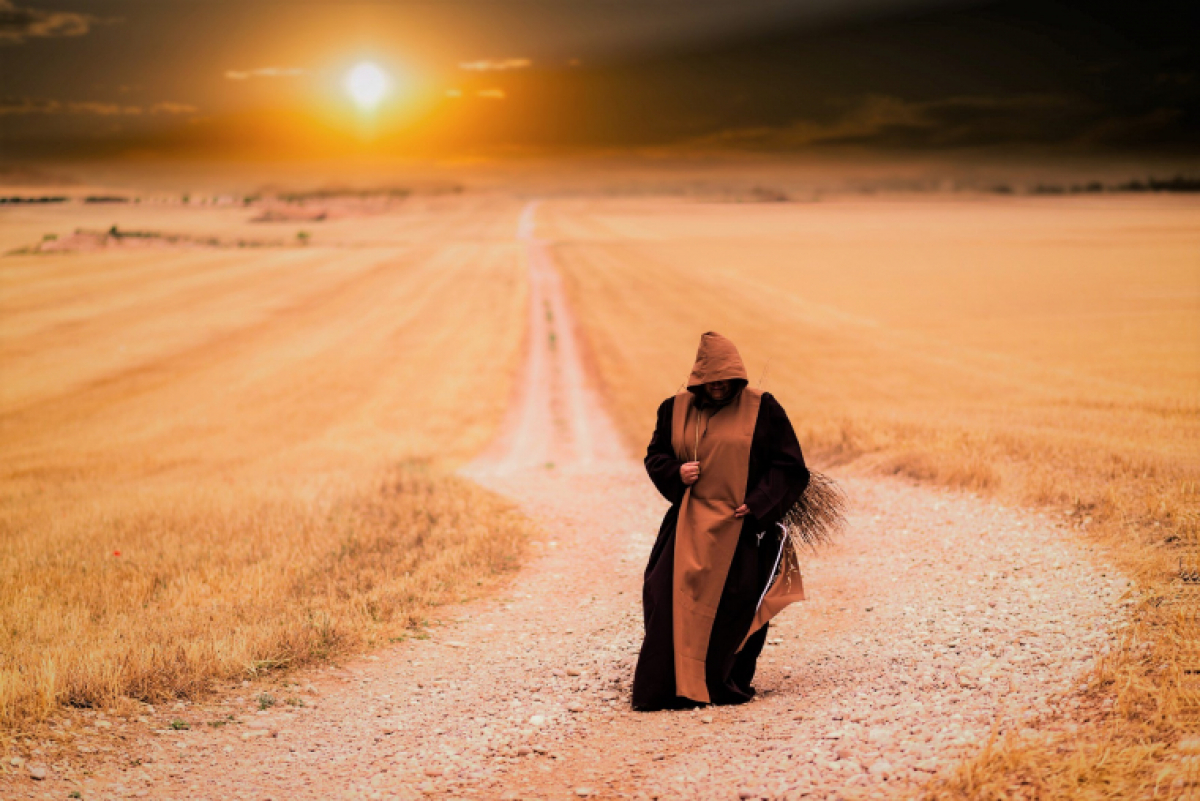 The Hermit is the utmost representation of wisdom and patience. |

In the crisis, the Hermit can both renew himself as well as die. This is a tarot card with a negative polarity, which invites you to reflect. So, if it appears in a tarot spread, it will not necessarily mean that your plans will be fulfilled, but that you must reconsider how you are solving your issues. This is a perfect tarot card to deal with issues from the past, even though you ask a question about the present or the future.

Sometimes going backwards is necessary in order to move forward. Walking backwards to the future also means that you live thinking about tomorrow. It is time to remember how you were in the past or to face those unresolved problems.

When this tarot card appears, it is time to consider what has ended or should end. You should look for what is important for your life and its meaning. In a question about the present, it indicates that psychological problems can now be addressed in therapy. You can begin that emotional grieving that you were putting off.

It also announces slowness and patience in the development of facts. What kind of patience and slowness do you face? That is the question posed by this Major Arcana card.

Step into the future even though you do not know where you are going. You keep in mind the events from the past, since they are the ones that have undoubtedly determined your path towards tomorrow. Although there is some delay, your wishes will be granted. However, events are being certainly developed.

In a tarot spread, when this card appears in a good combination, it is a certain sign of seriousness and future realization. Human beings can never completely dominate their lives, and you have to accept it.