Can you make a deal in hell? How to summon the Devil 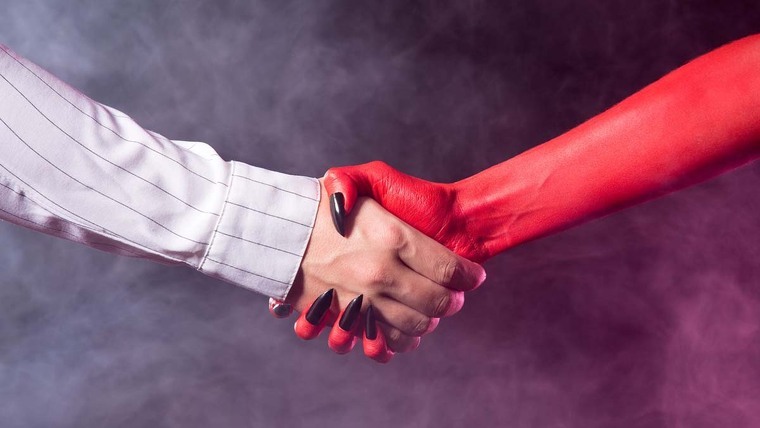 Can you make a deal in hell? How to summon the Devil |

At the dawning of humankind, man made the Devil to objectify one of the two opposing elements representing the eternal battle between good and evil. Later, Christianity narrowed it down to the Devil himself, a fallen angel representing the nemesis of God, and other faiths created their own image of evil. That's how this devilish ideal has reached our day and age. Let's know a little more about the Devil and the formulae to summon him and make a deal in hell.

Is the Devil the real thing?

The great connoisseur of the Devil, wizard and occult expert Eliphas Levi, made clear that rites across history to summon the Devil are something more than trickeries. "Within an active circle, all words create what they state", he assured, so we could say that anyone who believes they see the Devil is actually seeing it. That is, whoever states the Devil creates their own Devil, regardless of the different physical forms it can adopt.

And since believing in the Devil can create it, summoning evil presences enters the magic domain. But what's good about summoning the Devil?

Modern Western culture has created the myth of "deals with the devil" as an exchange in which the Devil provides mankind with an otherwise unreachable need in exchange for a human soul. Eternal youth, avoiding death, an empire of luxury and riches, or the love of a certain person. All great desires that have tempted many individuals to sell their souls. In times of great need like nowadays, it's quite normal to fantasise about the idea of summoning evil in order to reach a state of privilege that takes us away from need.

Still, there are certain measures to follow. When dealing with the Devil, an exchange is never born from equal positions, but always from the acceptance of submission to an incubus. Therefore, when we begin a rite to summon the forces of evil, we are at their mercy and we need to be aware that all doors opening up to regret and taking a step back are now shut.

Keys to summon and make deals with the Devil

Throughout history there have been countless manuals with recipes to summon the Devil, but most are compilations of low-level and highly unbelievable rites. Let's analyse the keys to summon and make strong deals with the devil, from the mind of Eliphas Levi.

Whoever's willing to summon the Devil as a previous step to a deal needs to meet certain requirements, like a fear-proof mind and blind faith on anything one can believe. Prior to the ceremony, you need to step on and curse all symbols you believe in, perform a blood oath and get a pin (a hazelnut or almond tree branch in the shape of a pitchfork, carved with the knife used in the sacrifice).

As an essential requirement, you will also need to fast for 15 days before the rite takes place. You will only be allowed to have one meal a day: black unseasoned bread, or black beans with milky or narcotic herbs.

The rite must be performed on the night from Monday to Tuesday, or Friday to Saturday. The chosen spot to deal with the Devil must be a barren place, and if possible, a place with dark connotations, such as a cemetery, an abandoned mansion, forests where sad events have occurred, or religious altars left to rot. You will need a linen habit, a lead bowl with a crescent drawn on it, the magic pin, two candles in a wooden candleholder, a skull, a cup with the blood from the sacrifice, incense-based perfumes, camphor, aloe and grey amber, and a magic sword.

Take the sword and draw a circle with an exiting path, then make a triangle with the blood. The summoner will then step into the circle barefoot with their head covered, and begin the calling.

To deal with the Devil you will have to make the calls compiled in various manuscripts throughout history. Because the idea of the Devil is the ultimate expression of senselessness, formulae make no sense in vernacular languages, so there's no meaning to be found. Thus, for instance, one of the most well-known formulae goes as follows: "Dies Mies Jeschet Boenedoesef Douvema Enitemaus".

Lines to deal with the Devil need to be read slowly, at a gentle, constant pace and raising your voice until forces begin to manifest. If the summoner has assistants, they can whisper some melodies to pair up the summoning call with a dark, eerie music background. According to demonic manuals, the Devil will manifest himself as a strong wind that will cast animals away and surround the summoner, so they will feel a gust of air on their face and begin to sweat.

In order for the deal with the Devil to be effective, Eliphas Levi points out that it needs to remain written down on a piece of parchment. The dealer can write down their wish in magical ink and offer the Devil a copy. Historical archives have written proof of sample documents of deals with the Devil, where wizards attempted to offer their services to the Devil for a set time, in exchange for their requests being fulfilled.

When the summoner feels the presence of the Devil, they continue to call outlines from the manuscripts while burning the parchment over the fire. The exchange has been successfully performed, although its effects could manifest themselves with a slight delay.

What do we get from dealing with the Devil?

As you will have noticed by now, deals with the Devil are ancient rites of great complexity. On the one hand, they involve such a deep knowledge of black magic that it's almost compulsory to carry it out with a real wizard. On the other hand, it requires some elements that are hard to get and detailed preparation that can escape our possibilities and abilities sometimes. But the most important thing is, summoning the Devil is no joke or game. It's a sacred rite that could have unexpected consequences.

Nowadays, white magic and black magic have developed modern spells that could work so much better than dealing with the Devil to get immediate desires fulfilled, and they have fewer risks as well. Believing in the Devil will always remain as an acquired sense of remembrance of evil's constant presence. But, unless it isn't a real, life-or-death requirement, it's best to follow the old adage and avoid calling the Devil.