The Goddess that Represents You According to Your Zodiac Sign

Which Greek goddess are you? Get to know these twelve deities and their characteristics 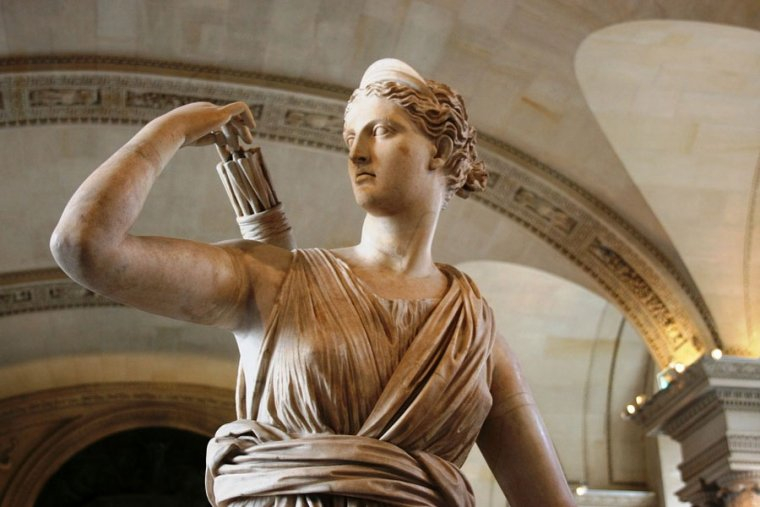 The goddess that represents you according to your zodiac sign.

Through mythology, we know that the different gods and myths were created to explain life and our existence, and why they are the way they are. Different deities and creatures represent all of the personality traits that are found in humanity.

Bravery, fear, pride, fidelity, gluttony, embarrassment, violence, and loyalty, all come to life through these figures.

Also, it's worth noting that the signs of the zodiac come from mythology, which is why logically, each sign corresponds with an ancient goddess as well.

The Goddess that Represents You According to Your Zodiac Sign

These are the twelve goddesses according to the astrological tradition

If you're an Aries and you're asking yourself what goddess represents you, according to your zodiac sign, you should know that it's Nike: Appears represented in the form of a winged woman, driven by Zeus, as a messenger. Nike is particularly associated with Athena, and in the Hellenistic period becomes divine herself. Slowly replaced by Hermes, as a messenger to the gods, but then becomes the symbol of victory and looms over the winner, bringing them the crown of laurel. Represents perseverance and the desire to break stereotypes. 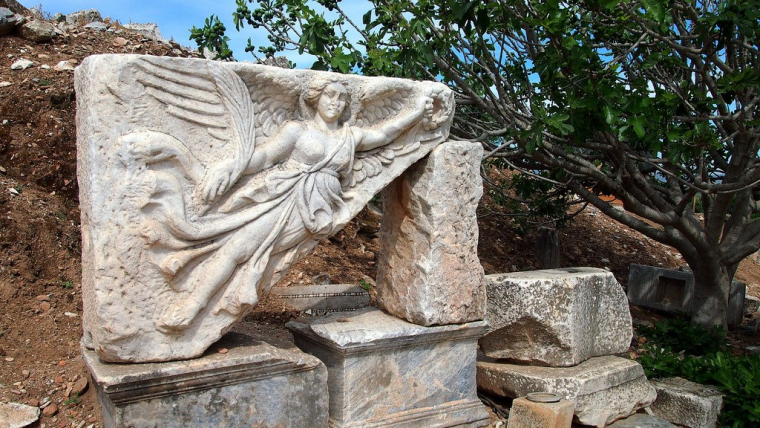 Which Greek goddess are you based on your zodiac sign? If you're an Aries, then you're Nike.

Aphrodite was born of the immortal seed of Uranus, the god whose genitals were cut off by Cronos and tossed into the sea. This goddess was forcefully married to Hephaestus, an ugly limping god, but fell in love with Ares, and had several children with him, among them, Eros. On her list of lovers, the name Adonis also appears. Aphrodite is your goddess according to the zodiac if you're a Taurus, and is a symbol of comfort, benevolence, and the willingness to lend a helping hand to one's neighbor. 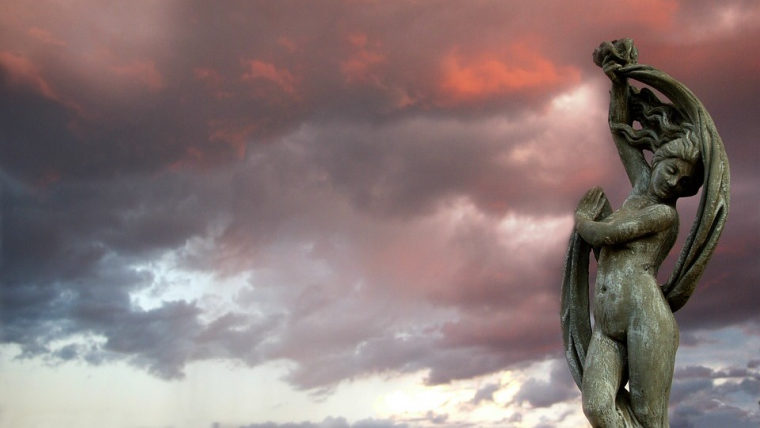 Aphrodite is the Greek goddess that best represents Taurus based on the zodiac.

In Greek mythology, the goddess Iris was born from the union of Thaumas and Electra, and was also a messenger to the gods, like Nike. Iris played an important role in the Trojan War since she warned Menelaus of Helen's kidnapping. Goddess of the rainbow that married Zephyr, the Western wind, and was the mother of Pothos. The main strength associated with Iris is her reflective and communicative abilities. So, if you're a Gemini, then Iris is your inner Greek goddess. 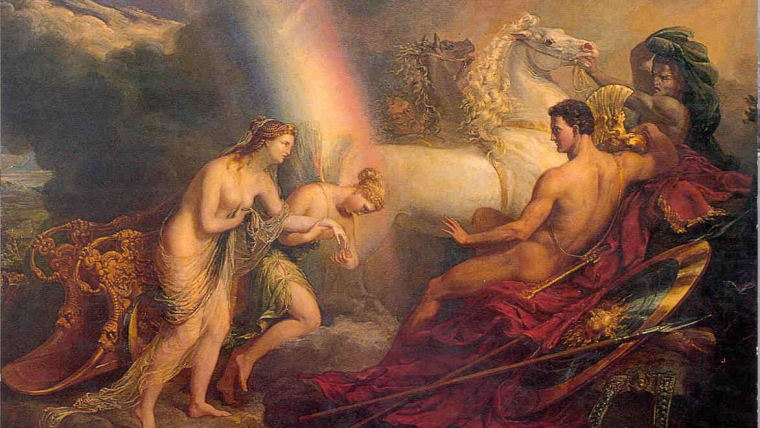 Discover Iris Greek goddess personality traits, and what makes her the most representitive diety for Gemini.

Among the list of goddesses according to your zodiac sign, Demeter is considered to be the goddess of fertile and cultivated land, since she was the one that taught humans to plant and till the land. This diety is the daughter of the titan Cronos and his wife Rhea, and sister of Zeus, Poseidon, Hades, Hestia, and Hera; her daughter Persephone also stands out among her family members. If you're a Cancer and your goddess according to your sign of the zodiac is Demeter, you have a strong maternal instinct, which can make you inclined to make big sacrifices in order to achieve what you desire. 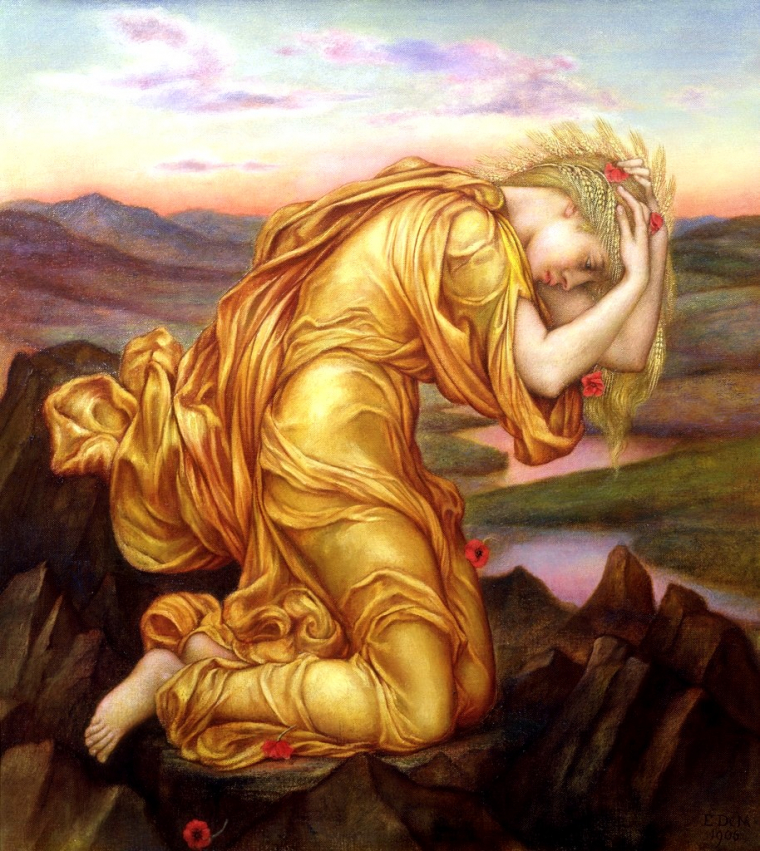 The Greek diety, Demeter, is Cancer's goddess based on her zodiac personality traits.

If you're a Leo, your goddess is Eos, also known as Aurora, daughter of the Titans Hyperion and Theia and sister of Selene and Helios. At the end of every night, Eos gets out of her bed to get into her carriage drawn by fast horses and ascends into the sky to warn the gods and mortals of the imminent arrival of the sun's golden light. Married to Astraeus and the mother of the Winds. This mythological deity represents self-confidence, and the desire to take risks and live passionately. 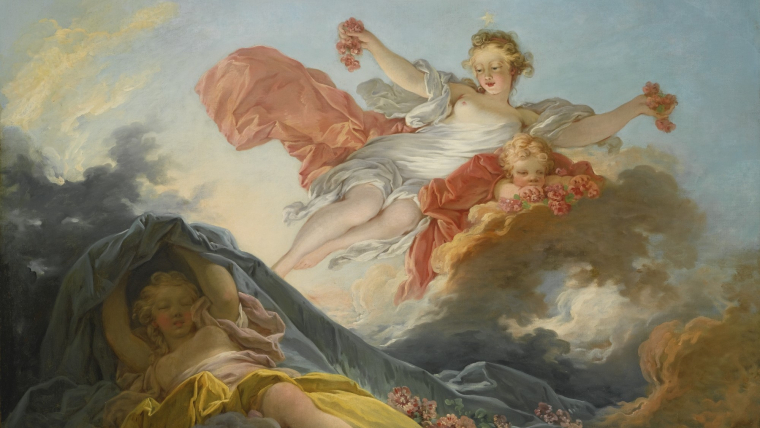 Leo's goddess is Aurora (Eos) or the goddess of dawn.

Divinity and symbol of the home and the sacred fire, Hestia was the first daughter of Cronos and Rhea and was swallowed by her father at birth like her brothers and sisters. Hestia never left Olympus and never participated in any fight among the gods or men, and Zeus, being grateful for this, granted her the first victim of every public offering since she knew how to protect the peace of his kingdom. Among the characteristics and strengthens that this goddess brings to Virgo, standing up for unity, order, and goodness, as well as equilibrium, stand out. 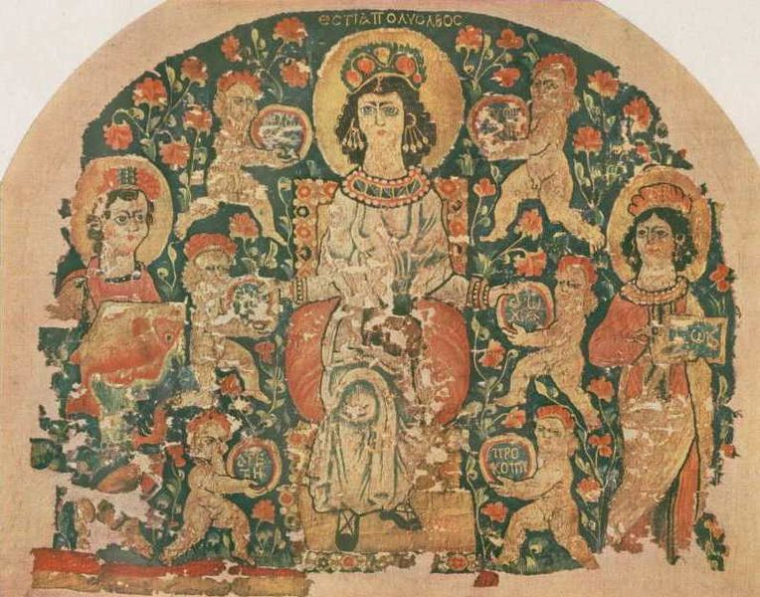 Which Greek goddess are you based on your zodiac sign? If you're a Virgo, then Hestia (Vesta) is the diety that best represents you.

The Greek goddess Themis, daughter of Uranus and Gaia was Zeus's first wife, and represented divine justice and permanency and impartiality personified, assuring good relationships among the gods. Just like Libra, one of her main symbols is the scales. Themis is the mother of many gods and divine mythological figures, such as Horae, the Fates, and Prometheus, who she transmitted some of her wisdom to; in fact, she is a cautious figure and knows some essential secrets. Her foresight also helped the Oracle of Delphi for a period of time. 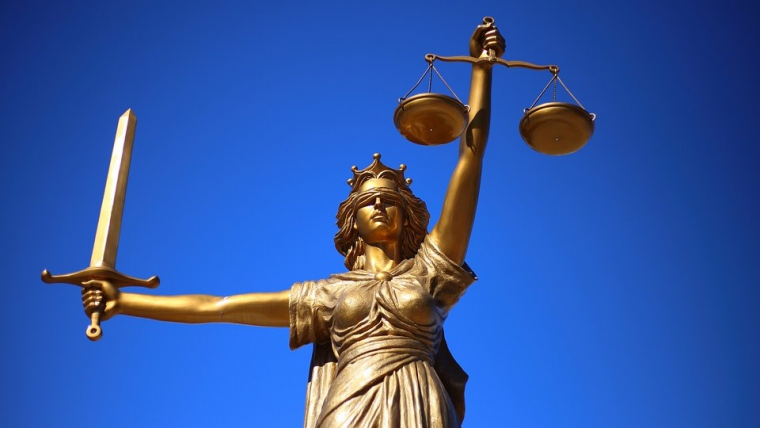 Libra, in Greek mythology, Themis, the goddess of justice and all things fair is the diety that best represents you based on your sign.

For Scorpio women that find themselves asking who their goddess is according to their sign, it is Persephone. Daughter of Zeus and Demeter, the goddess of beauty, worshiped in many cities. Just like her mother, she is the goddess of wheat and later became a member of the infernal divinity, since she ended up marrying Hades. If she is your goddess according to your zodiac sign, you possess an amazing ability to overcome the tests that life puts before you, and you have the gift of empowerment and to transform circumstances. 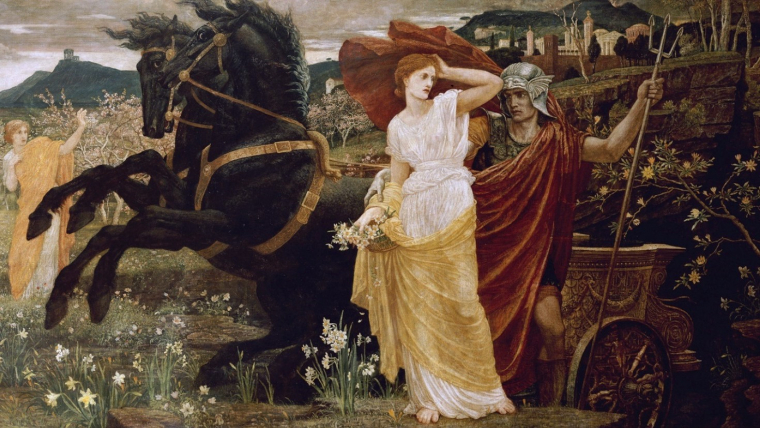 Which Greek goddess are you based on your zodiac sign? Scorpio women are represented by Persephone (Proserpina) daughter of Demeter.

Daughter of Leto and Zeus, Artemis was born on the island of Delos, before her twin brother Apollo. An excellent hunter, Artemis is one of the three virgin goddesses of Mount Olympus together with Athena and Hestia. She wished to remain a virgin and pure for her entire existence, as a nymph, and punished men that tried to seduce her or that made disrespectful comments. A symbol of independence, the fight for ideals, and fighting the established norms and conventionalisms. So, if you're a Sagittarius, then Artemis (Diana) is the goddess that best represents you. 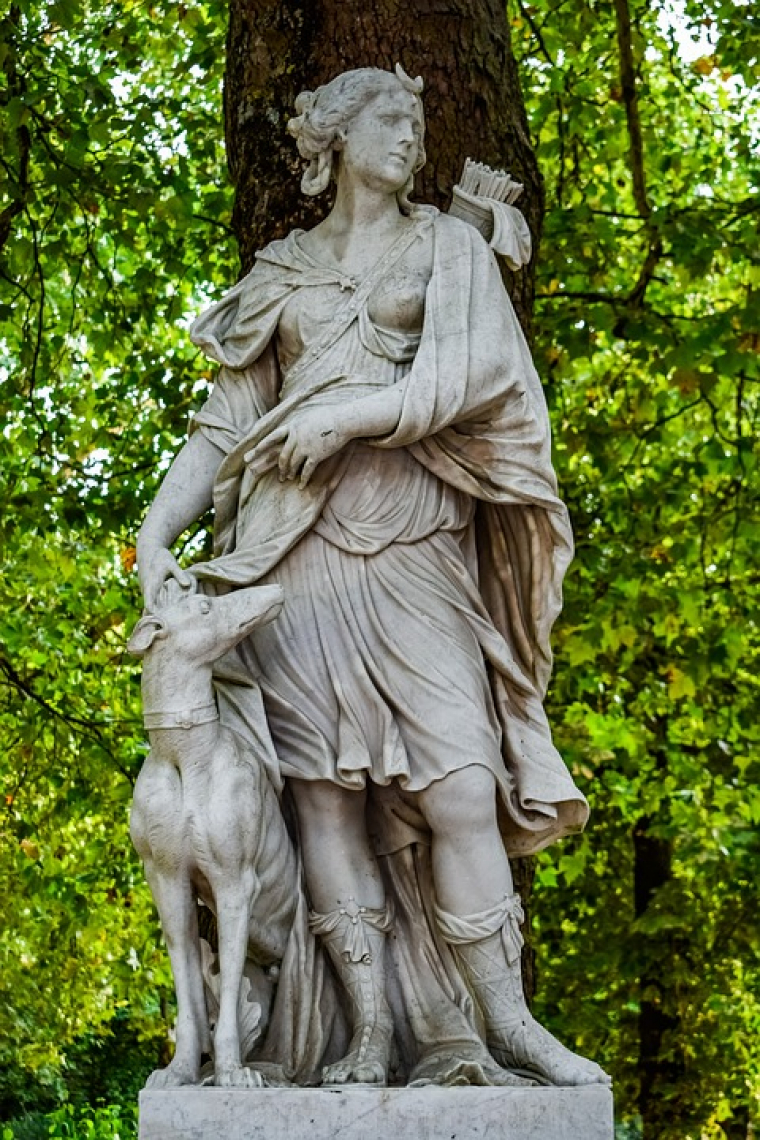 If you're a Sagittarius, then Artemis (Diana), the hunter, is your inner Greek goddess based on your horoscope.

Hera is Zeus's wife, the Queen of the Sky, and just like this, she helped him to govern Olympus. She is Zeus's right hand as they make decisions together. She is the ideal companion, the base of all of Olympus's success. She leads their marriage and public functions. She is well mannered and decent. She plays a crucial role in command. If your goddess according to your zodiac sign is Hera, you should know that she represents a powerful goddess, that allows you to connect to your inner world and guides you in decision making. So, if you're a Capricorn, then Hera (Juno) is your inner Greek goddess. 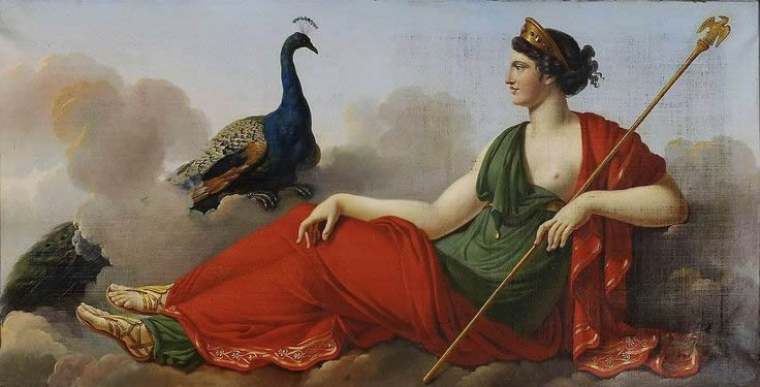 Which Greek goddess are you based on your zodiac sign? If you're a Capricorn, then Hera (Juno) is your inner diety.

Athena is the daughter of Zeus, and was born armed and already an adult from her father Zeus's head, that had eaten her pregnant mother. She is the goddess of war and the defense of cities, wisdom, guardian of heroes, and patron of artisans. As far as her personality as a Greek goddess goes, Athena presents herself as an extroverted woman, independent, and dominant. She is highly practical and intelligent, always prominent in her workplace, and very intimidating, especially when it comes to men. So, if you were born under Aquarius, then Athena (Minerva) is the Greek goddess that represents you. 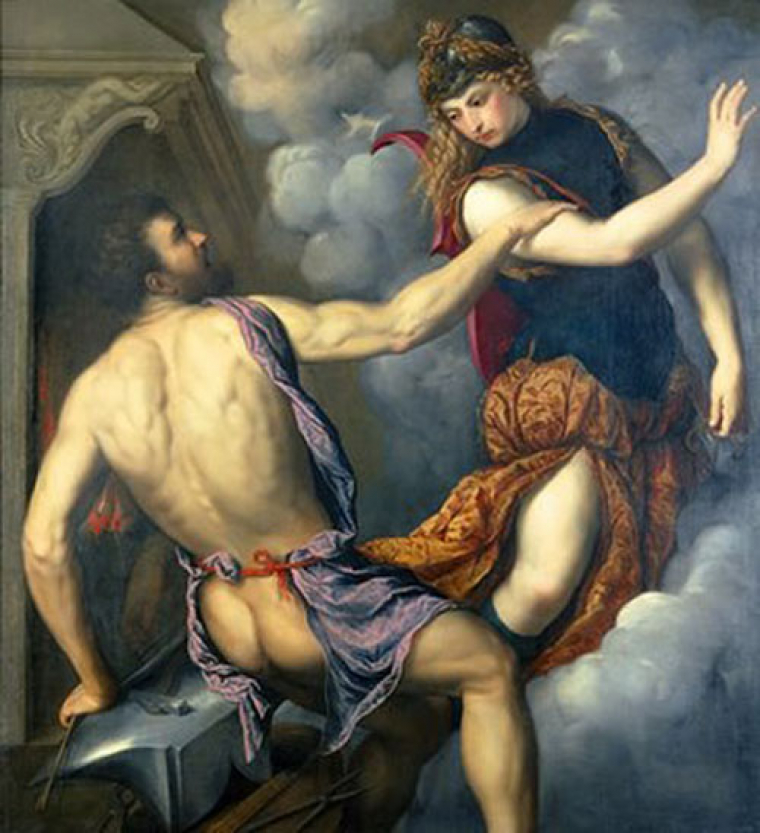 Aquarius Greek goddess: Your inner diety is Athena (Minerva) if you were born under this zodiac sign.

And to finish things off, if you're a Pisces and you want to know who your goddess is according to your zodiac sign, we introduce you to Psyche, the human soul personified in mythology; Cupid loved this goddess but just from a distance hidden by night's darkness, he never let her see him. Psyche, curious, falls on top of him, he wakes up and runs away forever. Psyche invites humans to be strong and secure, especially when others judge them. 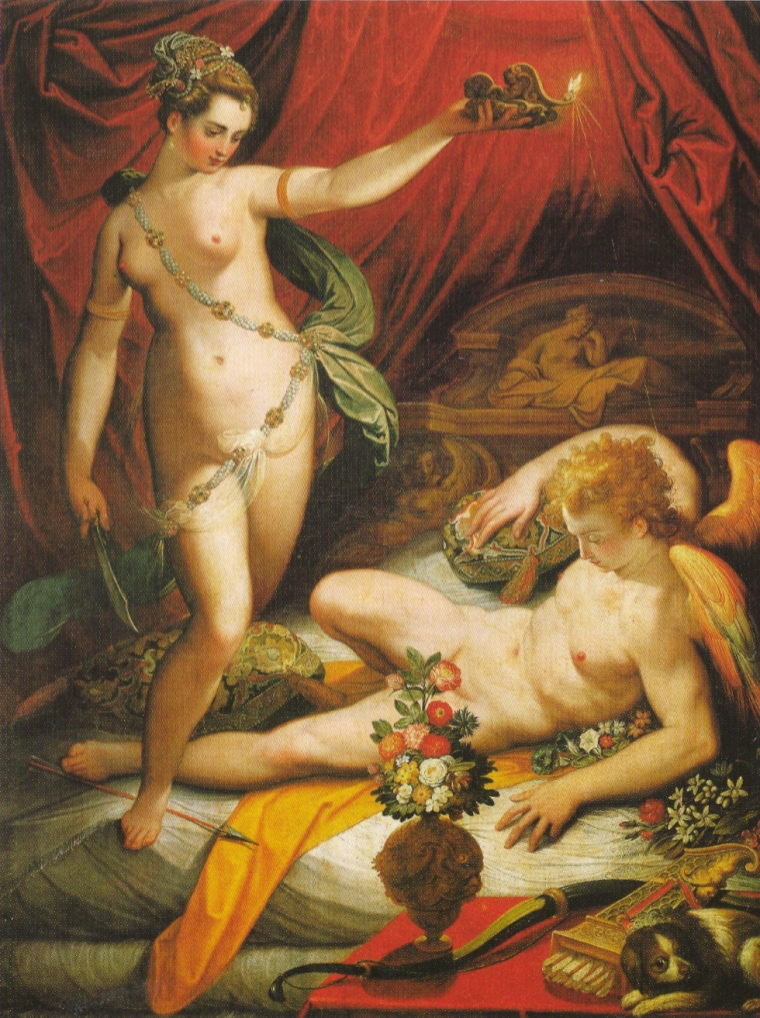 Which Greek goddess are you based on your zodiac sign? If you were born under Pisces, then Psyche, Cupid's love is your inner diety.